Last Tuesday 5 February, the official process for the beatification and canonisation of Pedro Arrupe SJ began. He was one who emerged at a time in our Jesuit history when bold leadership in the Society and Church was needed. By Fr Brian F. McCoy SJ

We all need heroes in our lives, people who encourage us to be more human, generous and courageous; who help us live those things we deeply believe, and explore the deeper connection between being people of faith and people of action. 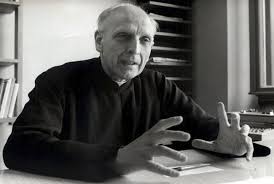 Last Tuesday 5 February, the official process for the beatification and canonisation of Pedro Arrupe SJ began.

Some would say a saint is not necessarily a hero. Some saints have been well known to be difficult people to live with. But I believe Pedro Arrupe was a most remarkable Jesuit at a time when we needed strong, faith-filled and love-fuelled leadership. He was an inspiration to to many and his legacy continues.

Pedro Arrupe was Superior General of the Society of Jesus from 1965 to 1983. He was born in Bilboa, Spain, in 1907 and was exiled from Spain with other Jesuits in 1932; he went to Japan as a missionary in 1938. There he was arrested after the bombing of Pearl Harbour and placed in solitary confinement for a month.

He was in Hiroshima as novice director when the first atomic bomb was dropped on the morning of 6 August 6 1945. The novitiate became a field hospital.

Last year I visited the community where Pedro had lived and where the community and novitiate chapel had served those suffering after the dropping of the bomb. No one at that time, anywhere, knew how to care for those affected by radiation burns. Nearly all who came under the care of Pedro and other Jesuits survived.

He would late recall the experience of saying Mass in that same chapel and in the presence of all the sick and wounded:

‘I can never forget that terrible feeling I experienced when I turned toward them and saw this sight from the altar. I could not move. I stayed there as if I was paralysed, my arms outstretched, contemplating this human tragedy.’

Pedro knew that space where faith and human tragedy meet and risk paralysing us. Hiroshima taught him that lives of faith could not be separated from lives that lived, loved and promoted justice. The service of faith comes with the promotion of justice (Decree 4, General Congregation 32).

In 1980 he established the Jesuit Refugee Service, a lasting universal response in faith to the continuing face of human suffering and tragedy in our world. In 1981 he suffered a stroke while on a flight back to Rome. It left him an invalid for the last decade of his life. He died in Rome on 5 February 1991 (coincidentally, the eve of feast of the Japanese Martyrs) at the age of 83.

He remains for Jesuits, and many others, one who emerged at a time in our Jesuit history when bold leadership in the Society and Church was needed. He is now considered to have helped ‘re-found’ the Society of Jesus at a time, after Vatican II, when inspiring and courageous leadership was needed.

I am happy to call him a hero, canonised or not.