A pastor without peer

In his homily at the funeral for Fr Paul Coleman SJ, Fr Michael Kelly SJ said one of the most extraordinary things about Paul was how his inclusiveness brought him into contact with so many different people.

St Mary’s North Sydney was full for the funeral celebration of Fr Paul Coleman SJ on 5 October, as parishioners joined Jesuits and family in saying farewell to a priest who touched many lives.

Paul died on 25 September aged 90 at the Mater Hospital, where he had previously been a long-time chaplain. Much of his priestly life was spent in various roles in Sydney, including many years at North Sydney parish. 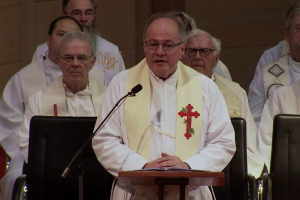 In his homily at the funeral, Fr Michael Kelly SJ said one of the most extraordinary things about Paul was how his inclusiveness brought him into contact with so many different people, in so many different walks of life.

‘He was a pastor without peer’, said Fr Kelly. ‘He was someone who didn’t know what to do unless it was to give. And what did he give? He gave in response to what Jesus invited Peter to do: Feed my lambs, feed my sheep.

‘There was no one too high, and no one too low … No one too egocentric, and no one too self-deprecating, who wasn’t included in the reach of his love. From his life as a prison chaplain to the grandeur of his investiture at Government House. He reached everywhere.’

Fr Kelly spoke about being with Paul at the last stages of his life, when even then he felt that he needed to be out there doing ministry work.

‘It was an enormous surrender for Paul to not be what he’d always been, which was a compulsive servant’, he said.

‘Which was again the only reason he joined the Jesuits, and the only reason there is for being a Jesuit. It’s not to build up a diocese, it’s not to maintain a prestigious college — it’s to serve people in all their immense variety. To be there accompanying people on their journeys.’ 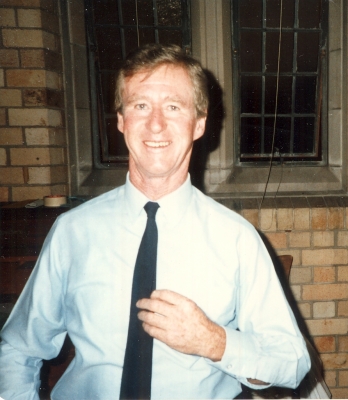 Fr David Strong also remembered Paul as a ‘most compassionate, human priest’ who empathised with people in need.

‘He knew how best to console, sustain, encourage and give hope when required. Having felt unjustly treated himself on a number of occasions during his life, he was able to relate well to those who felt similarly treated’ said Fr Strong.

‘Paul never discriminated between people: everyone was important and worthy of his respect and acceptance. He fought against discrimination in the Church, and was an advocate for giving equal rights to women.’

He was, noted Fr Strong, highly sought after for baptisms, weddings and funerals, touching many lives in the process.

‘Paul’s liturgies made good sense to his worshipping community, and his spiritual accompaniment of people was exemplary. He was a powerful and compelling speaker, preaching what he believed his people needed to hear in order to give them hope.’

North Sydney parishioner Rosemary Flannery shared her memories of Paul in a eulogy, remembering how he was there for them the day after they moved into the parish in 1964.

‘The doorbell rang and as we answered the door, there on the doorstep was a good looking young priest who said, “I am Father Paul Coleman and I have come to welcome you into the parish.” My family are just one of hundreds of families who received this welcome to parish by Father Paul.’

The noted the many initiatives he set up in the parish, including scripture groups, a Regis group for over-21s, a resource group for single professional women, a men’s group that met in people’s homes, and a care and concern group that visited the bereaved. He was also responsive when new areas of need arise.

‘When the Vietnamese Boat People started to arrive in Australia, Father [Paul] formed a small committee of people with requisite skills to go out to the camps, speak with the families and offer help’, she said. ‘The group would then arrange accommodation, supply furniture and settle as many families as possible either in the parish or in other suburbs.’

The full texts of the homilies and eulogies are available on this tribute page for Fr Paul Coleman.