The place of religion in society has changed greatly since Hawthorn Catholic Parish was first established 150 years ago, but the anniversary celebrations on 6 October showed how the people of the parish continue to keep the flame of faith alive. 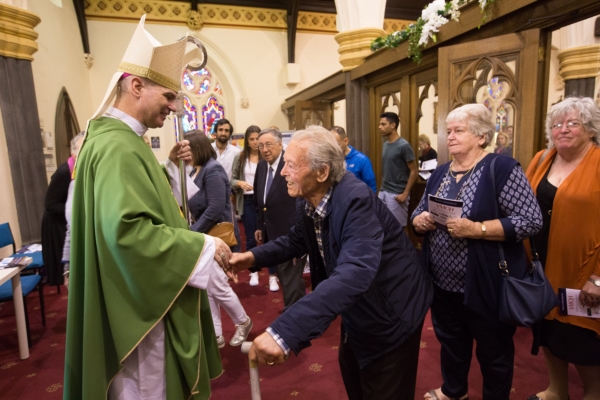 Archbishop of Melbourne Peter Comensoli blesses a parishioner during the anniversary Mass.

The place of religion in society has changed greatly since Hawthorn Catholic Parish was first established 150 years ago, but the anniversary celebrations on 6 October showed how the people of the parish continue to keep the flame of faith alive.

‘Faith is a light to be fanned into a blazing fire, not typically left on the mantelpiece to give off a reassuring glow’, Archbishop Comensoli told parishioners in his homily.

‘The gift of faith that Christ set alight 150 years ago still needs fanning and still needs fanners … You stand on the sacred ground of those Christian disciples who went before you who did not demand “give us more faith” but humbly declared “we are his servants”.’

The Commemoration Mass also featured the debut of a new musical setting for the Hail Mary composed by Fr Christopher Willcock SJ. You can listen to it here, or download a copy of the sheet music.

At a barbecue following the Mass, a time capsule was buried, to be opened in 50 years at the 200th anniversary celebrations. Prepared by students from St Joseph’s Primary School in Hawthorn, the capsule included a school prayer, 150th ICC Parish Bulletin, school newsletter, a photo of the school community, students’ 50 year predictions, school site photos, and a snapshot of daily life at St Joseph’s School.

‘We hope that Catholic education is even stronger than it is today, and that our current students in our collective care continue to live faith-filled lives, walking in the footsteps of Jesus, and use their God-given gifts to positively contribute to our world’, said St Joseph’s Primary School Principal Sharon Kenyon-Smith.

A new website has been launched to share the story of the parish. It features videos and an online exhibition of the history of the parish. The resources were put together by parishioner Kevin Slattery, along with Province Archivist Fr Michael Head and assistant archivist Liz Parker.

For more on the 150th anniversary and the history of Immaculate Conception Church, go to: https://www.immaculateconceptionaust.com/150anniversary