Oscar Romero: From attendance to action

Oscar Romero was canonised in Rome on 14 October. His studies in Jesuit institutions and friendships with Jesuits were deeply influential in his life. Fr Brendan Kelly SJ reflects on Romero’s story, and how his actions emerged out of a deep attentiveness to God.

Jesuits and lay companions have just finished the Province Residential Retreat, which took place from 2 to 11 October at Peter Canisius House Pymble. The retreat was facilitated by Marist priest Fr Michael Whelan, and explored the theme of ‘Reconciliation’.

On 9 October, Fr Brendan Kelly SJ gave the following homily at Mass on the retreat, based on the reading of the day, Luke 10:38-42 (the story of Martha and Mary). 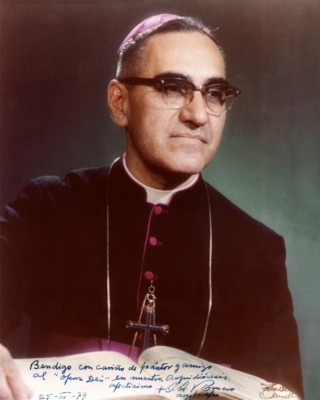 He depicts very well both the context of El Salvador, Latin America, and the Church at the time, within which the events of Romero’s life unfolded. As we know, it was a time of immense complexity amidst great turbulence and increasing violence. Morozzo assiduously traces and examines all the manifold interpretations of Romero’s life from the time he first went to Rome to study for priesthood in the late 1930s to the time of his death in 1980.

Fr Michael Whelan has spoken to us about how we live our lives with various tensions. He referred to us, for example, as arriving and departing people. As I read about Romero’s life, I see that he, too, was constantly living with tension.

A significant one of these was how to live a faith that was neither politicised nor spiritualised, a faith that both served justice and the full message of the Gospel, a faith that valued and proclaimed all that was truly human and that stretched humanism to its fullest realisation.

In today’s Gospel, we encounter yet another kind of tension, namely the tension between the active as represented in Martha, and the passive as represented in Mary. The late Jesuit, Fr Michael Paul Gallagher SJ, described these — active and passive — as ‘two loves at the heart of Christianity’: God’s love and the love of our neighbour. We are all for fussing about and doing things for ourselves and others, and yet we all as well have a ‘still point’ as T. S. Eliot called it.

In trying to explain the tension between these two loves, Michael Paul invokes a simple image — that of an upside down capital T. ‘God comes down to us (the vertical line). We go out to others (the horizontal line). It is really one love, flowing in two ways. And where the two points touch is where prayer happens.’

According to Michael Paul, prayer includes ‘that soaking in of love embodied by Mary sitting at the feet of Jesus’ and it ‘is also a source of active energy flowing into our real worlds’. As such, it provides the impetus to cross the road and do something.

In our story, today, Jesus clearly affirms that Mary has chosen the better part. She chooses to be still, attentive, and listen to Jesus, which is what we are about while here on retreat. Michael also has pointed out a number of times over these days that the key to the spiritual life, and indeed, growth as a healthy human being, entails awareness, attentiveness.

An elderly Jesuit once told me about a course on spiritual direction that he did with the great spirituality Jesuit, Fr Bill Connolly SJ, who also directed him on his eight-day retreat, as this was part of the program.

When it came to the direction session, he told me that all Bill ever asked him, and kept asking him for eight days, was: ‘And what did you notice?’ Occasionally, the question expanded to ‘And what then did you notice?’ or ‘What more did you notice?’ So we, in our turn on retreat, are afforded the privileged opportunity to watch, listen, and notice.

The object, the focus of our attentiveness and listening, as with Mary, is Jesus. Pope Francis has been stressing this in calling us to discard the paraphernalia that surrounds so much of our religiosity, and to attend and listen again, afresh, to the undiluted Gospel.

And our Church today, thankfully, from an unlikely source, the Royal Commission, has been pushed to this. We are to become, among other things, a Church of synodality, which means a church not of shared ignorance, but one which attends respectfully and closely to Jesus and his Spirit present in each human heart, and moves and acts only in his light and Spirit.

Romero knew this well — that it was Jesus who gave light and full meaning to all his activity. People have spoken of the big moment of his conversion at the death of his Jesuit friend, Rutilio Grande SJ. To a journalist at the Puebla Conference who asked him how his ‘conversion’ happened, he replied:

‘You can call it a conversion if you like, but I think it would be more accurate to describe it as a development in the process of awareness [emphasis mine]. I have always wanted to follow the Gospel, even though I could not guess where the Gospel would lead me.’

Romero’s vicar general, Ricardo Urioste, said of him: ‘Romero was a man who always kept changing when the voice of God was calling him to do something. He discerned it in prayer, in conversation with God, he kept looking for what God was asking of him.’

A friend of Romero’s, Rosa Cha?vez, observed: ‘It is more accurate to say that Romero underwent not a “conversion”, strictly speaking, but an “evolution,” as he himself said in a radio interview. This evolution was born of a passion that always motivated the archbishop’s journey: to discover God’s ways and to respond generously to his calls. This is the natural evolution of someone who lives in an ongoing conversion, in total openness to God and others.’

Like Mary in today’s Gospel, Romero sought to become aware and attend to the ever changing [and ever gloomier] contexts that he was engaging, and his listening led him to various actions according to those contexts — always seeking to follow the gospel.

Today’s Gospel invites us, too, in all its simplicity, yet evocatively and challengingly, to attend to Jesus. We are invited to allow the Mary in us to have primacy of place, so that our activity, the Martha in us, might be expressed in appropriate action, in a manner similar to that of Jesus himself, who frequently responded to his Father subsequent to time spent in prayer.