Ordained to be Christ’s servants

Three Australian Jesuits were ordained as deacons in Boston on 15 September. Each is looking forward to being a minister for Christ.

The diaconate belongs to the sacrament of Holy Orders. Deacons proclaim and preach the Gospel, lead people in prayer, preside over baptisms and marriages, and conduct funeral services. For those on the path to priesthood, the diaconate ordination usually takes place several months to a year before priestly ordination.

Ramesh Richards’ ordination was brought forward a year, meaning he will spend two years as a deacon before his priestly ordination.

‘I wanted to gain experience in the United States as a deacon before going back to Australia’, he said in an interview last month ahead of the ordination.* 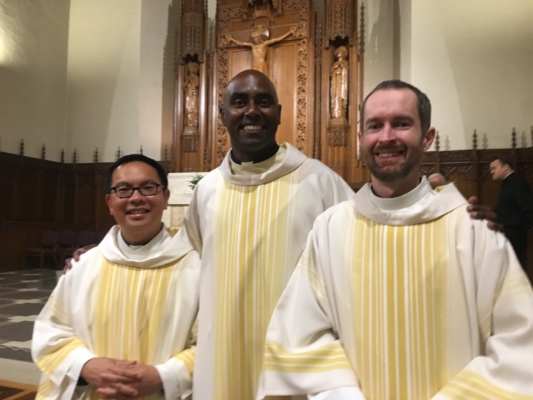 The role of the deacon, he says, is helping people encounter Jesus in all stages of their lives.

‘Essentially the role of a deacon is to be a servant. I feel that I’m being called to encounter the Christ that lives in others and to be close to them.’

Both Kieran Gill and Andy Nguyen are nearing the end of their studies in Boston, and will be preparing for priestly ordination next year. In interviews ahead of the ordination this month, both described diaconate ordination as an important step in their formation.

‘For me, as a Jesuit, it is not the end of theological formation (since for Jesuits, formation continues until final vows), but more significantly, a development of my identity, to that of a Jesuit priest’, said Andy.

‘In the sense of service to others, I tend to agree with Pope Francis, who said ordination is a demotion, not a promotion. A priest’s life is essentially about service to God and people. For me, being a Jesuit is a particular way of living my life as a priest. My service to the Church (being both the body of Christ and the institution) is through the Society.’

Kieran said an important aspect of ordination was being free to care for all people.

To know, love and serve: Q & A with Kieran Gill SJ

To know, love and serve: Q & A with Andy Nguyen SJ

*The full interview with Ramesh Richards will be published in the next edition of Australian Jesuit News.