New scholastics reflect on the journey so far

On 3 February 2018, two Jesuit novices of the Australian province, Matthew Pinson and Isaac Demase, made their simple perpetual vows at St Peter Canisius House in Pymble, NSW. We caught up with them recently to learn more about their vocation journeys so far.

Born in Maryborough, Qld, Isaac grew up in Lemnos in Victoria, and lived both at St Mary’s College and Newman College in Melbourne as a university student. He trained as a schoolteacher and worked at the FCJ College in Benalla, Vic. before joining the Jesuits. 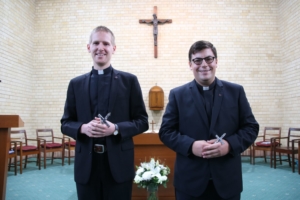 When did you first hear the call to religious life, and how did you come to the decision to take it up?

I found great satisfaction, enjoyment and challenge in being a secondary school teacher, but there were certain times when I just felt like I was being called to something more.

After a while, and after reading certain things on Ignatian spirituality and by Jesuit authors and on the life of Ignatius and of Jesuits, I decided that maybe that was how I was being called to live my life.

It wasn’t a renunciation of my life as a teacher. I enjoyed that and found great fulfilment in it, but I felt that I was being called to live my life in a different way, and a fuller way. My life as a novice confirmed that for me.

What was it about that experience that confirmed it for you?

The experiments or pastoral placements that we went on are great times of testing whether this life of dedication to God through our service is how we’re best fulfilling our baptismal call.

In the Spiritual Exercises Ignatius talks about ‘to love and serve’, and the experiments are a great chance to see whether living as a Jesuit is the best way that I can love and serve God and God’s people.

The experiences I had weren’t always easy, but at the end, in reflecting on them, they were moments of confirmation that this was the path for me.

What drew you to the Jesuits in particular?

There were many people in my development through my teenage years and university who suggested along the way that I could become a priest.

I did go to enquiry day at the diocesan seminary and I really admired from my own experience priests that I got to know and see in their pastoral work. But it didn’t feel right. It’s an individual thing I suppose.

Something stirred within me each time I engaged intellectually or prayerfully with Ignatian spirituality … discerning that spirit and holy desire. I came to discern that the Jesuits were the best way I could serve God and God’s people.

What was the most challenging aspect of deciding to pursue religious life?

I suppose it was family and friends. Not being able to have a family of my own, [the prospect of] being missioned to ministry somewhere where I wouldn’t have contact with family and friends; they’re very important in my life. That was one of the biggest inhibitors to my deciding to join the Society.

How did you go about telling your family and friends? And how did they respond?

There were mixed responses, but on the whole it was very supportive. As good family and friends would hopefully do, they asked whether I had discerned and thought about it, considered all the options. Having gone through those discussions with them they were very supportive. And excited too, of course.

What are you most excited about as you continue on this journey?

I’m excited to continue to seek and find God in my daily life, through the community, the Jesuits I live with; through my studies at the minute and future ministry. I’m excited to live each day for and with the Lord, to love and serve.

From Cowra, NSW, Matthew previously trained in science, earning a PhD in physics from Massachusetts Institute of Technology in Cambridge, USA. He also spent some time doing post-doctoral work at James Franck Institute in Chicago, just before entering religious life.

When did you first hear the call to religious life, and how did you come to the decision to take it up?

It was back in 2014. I was getting towards the end of my PhD and working out where I was heading next, and as I was looking at the various opportunities available I realised that in order to work out what I wanted to do next I really needed to establish what my priorities are in life.

I decided that I wasn’t giving my faith as much priority as it deserved, so I should do something about that. So I decided to pray a bit more and pay attention to how I could live out my faith in my life.

When I began, I really thought that it was just about things I could do day to day, what kind of post-doctoral position I might be looking at, but in fact I was praying one day and felt really quite a strong call to look into become a priest. And I’ve been following that path ever since then.

What drew you to the Jesuits?

First it was my academic background, I thought it was a group that I’d fit well in, I’d find the right community around me, people who valued that way of looking at the world.

And then as I got to know them better, it’s especially been about being open to all sorts of different ways of serving. Discernment is the word we use in the Jesuits, to not be fixed on one particular pattern but to try to weigh up things: what’s God really calling me or us to do at this particular time?

Are there any particular Jesuits who inspired you?

I was living in the US, so it wasn’t the Australian Jesuits whom I got to know, it was Jesuits in the US. There were a couple of them. One was John Peck, who was working at MIT when he was a Scholastic; it was good to get to know him.

And the second was Jim Prehn, he was my spiritual director when I was a candidate. And he really encouraged me especially in understanding how to recognise God’s call in my life, and the freedom that I have in working out how I want to live out my faith.

What was the most challenging aspect of deciding to pursue religious life?

The realisation that there are so many good things out there to do with my life, and that saying yes to some of them inevitably means saying no to others.

I moved to Chicago the year before I joined the Jesuits and my plan was always to spend the year there, but I enjoyed the work so much and really felt at home with my work colleagues and had great friends, that it was a real sense of leaving behind such a good situation. It felt a bit unfinished, leaving that.

I think that’s generally how it is. It hasn’t been so much challenges and obstacles as saying goodbye to other good things that I could be doing instead, because I decided to do this one.

How did your family respond to the decision?

My family was supportive and also realistic that there are big challenges involved in this. But they trusted me to go into it with my eyes open, to understand or discern the different aspects of life as a religious. Mum, I think, had suspected for quite a long time that I might head in this direction. Dad was never convinced, but he has a lot of trust in me to make the right decisions in my life.

What are you most excited about as you continue on this journey?

I’m most excited about the people I’ll be journeying with. On the vows weekend, for instance, when all the Jesuits gathered together for the prayer evening, I felt so welcomed into this community and inspired by the others who have been Jesuits, in most cases for many years before I arrived on the scene.

And not just the Jesuits but other people around. I already saw at Mount Druitt a lot of young people whom I was really happy to be able to have a lot of interactions with, and I’m sure I’ll keep meeting great people to work with and alongside as a Jesuit.

These are the expanded versions of interviews that appear in the latest edition of Companions magazine.

Jesuit Vocations Ministry in Australia is offering a weekend retreat for single men, 20-30 years old, who are discerning a vocation to the priesthood or religious life. The retreat will be held in Gerroa from 6-8 July 2018, beginning at 6pm.