Led by parish priest Fr Andy Bullen SJ, the liturgy moved those gathered to reflect on the pain of their sisters and brothers who were abused spiritually, emotionally and physically.

On 5 December 2017 parishioners at Our Lady of the Way Parish in North Sydney took part in a Liturgy of Lament for all those affected by institutional sexual abuse. 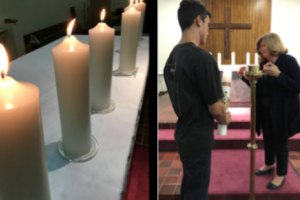 Lighting candles during the Liturgy of Lament

Led by parish priest Fr Andy Bullen SJ, the liturgy was very moving as we gathered to share the pain of our sisters and brothers who were abused spiritually, emotionally and physically.

We asked forgiveness for the abuse in the Church, any of its ministries in which we have been involved, or against anyone who has come under the Church’s care.

Prayers of Lament were read by parish representatives of ministries including Jesuits Daven Day and Michael Stoney. After each prayer, a candle was lit. Music was provided throughout the service by Marist Br Tony Butler on the keyboard.

‘We lament the hurt and injuries inflicted upon abuse victims, survivors and their families’, went one particularly powerful prayer. ‘Together we repent of the hardness of heart and lack of pastoral love that added to their trauma and prolonged their suffering.’

The Liturgy of Lament is an adaptation of the ‘Liturgy of Lament and Repentance for Sexual Abuse of Children by Priests and Religious at St Mary’s Pro-Cathedral in Dublin, February 2011’ and a ‘Prayer in Response to the Royal Commission Report’ by the Sisters of St Joseph.

The Liturgy was a local adaptation of one used in the recent Jesuit Gathering and Provincial Consultation.