A night with the Vatican Astronomer

Jesuit Scholastic Matthew Pinson, who has a background in physics, reflects on the visit to Melbourne of Br Guy Consolmagno SJ, director of the Vatican Observatory.

Jesuit brother Guy Consolmagno is director of the Vatican Observatory, an organisation founded to show the world that the Church supports science. Yet he finds that much of his job is almost the reverse: ‘to remind religious people that science is part of our religious heritage’. 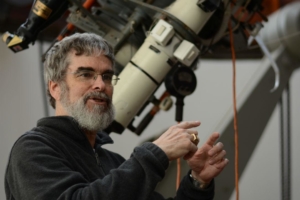 Last month he was in Melbourne to do just that, speaking about his experiences as a committed Catholic and an active scientist, as part of the archdiocese’s Sparks of Beauty series.

Beauty is one of the aspects of science that scientists often find difficult to convey to outsiders. When I began doing scientific research, I compared the thrill of making new discoveries to reading an exciting book, but one that is true, and that I am the first person to ever read.

If the nuclear physics I was doing then is a novel, perhaps astronomy is the universe’s biggest, most spectacular picture book. Br Guy showed us a few pages from this book, treating us to images of the Martian landscape taken by the aptly-named Curiosity rover.

Yet as awesome as the images are in their visual beauty, they’re even more compelling in how they help us realise that here lies a real place. A place similar to our own home in many ways, yet utterly foreign. ‘A place where you could imagine scrambling over the rocks and sliding down the other side’, said Br Guy, but where the sky is pink and each day lasts just a little too long.

A place entirely devoid of life, but where ‘human beings have left their mark’ by sending robots.

How does a believer respond to this beauteous grandeur? For St Francis of Assisi, it was through poetic praise: ‘Praised be You, my Lord, with all your creatures; through Brother Sun … through Sister Moon and the stars … Water … Fire … Earth.’

For Br Guy, it’s through the poetry of scientific research. The marvel at nature that scientific discoveries instil is truly an example of wonder and awe in God’s presence.

And just as science can be part of our worship of God, Br Guy told us a little of the history of how the Church has contributed to science. Believing there is one God who created the universe in an ordered way, instead of many nature gods constantly at war, means you can start trying to learn the laws that govern the universe.

When this endeavour began in earnest in Europe in the 1300s, it was carried out by clergy and at Church-sponsored universities. In more recent times, the big bang model of cosmology was first developed by Georges Lemaitre, a Catholic priest (and, like both Br Guy and me, a graduate of MIT).

Lemaitre recognised that Einstein’s equations of general relativity imply that the universe began a finite time ago. This irritated many atheist scientists, including Einstein, who tried to modify his equations to allow a universe with no beginning.

I enjoyed Br Guy’s talk so much that I invited myself to his talk the next day, to the staff of Campion Centre of Ignatian Spirituality. There, Br Guy told us more of his own story, and I recognised much that I have also experienced.

Despite how much he and I enjoyed our lives as physicists at prestigious universities, we both recognised that there’s more to life than one’s profession, and that God might have something else in mind for us.

At a deeper level, he spoke about how people who look at the world in a primarily scientific way (‘nerds’, to use Br Guy’s term) experience spirituality. We are people of logic, so even though spirituality can’t be reduced to logic, it had better have some kind of overall consistency that we can at least begin to comprehend.

Of course, sometimes we might need to be pulled back from thinking that we should be able to explain everything neatly and rationally!

And just as every scientist has learned so much from teachers, nerds tend to be willing to accept authority. We’ll therefore readily believe what a spiritual mentor tells us, even if coming to experience and understand it for ourselves may take a long time. It sounds like much of my spiritual journey since applying to join the Society!

Br Guy has achieved some fame as an astronomer and communicator of science, but what I hope I can imitate is his joy at the physics he does, the life he lives and the God who created him.