John Henry Newman will be canonised, along with four others, on Sunday 13 October. Newman College Rector Fr Bill Uren explores the story of a man who figured prominently not only in the religious, but also in the academic, the social, and even the political, life of Victorian England.

On Sunday, 13 October, John Henry Newman, along with four others, will be canonised in Rome by Pope Francis. It will be an occasion of great rejoicing in Rome, in England, especially in Oxford and in Birmingham, at Newman College at the University of Melbourne, and at many other schools and chaplaincies which invoke Newman as their patron and inspiration. 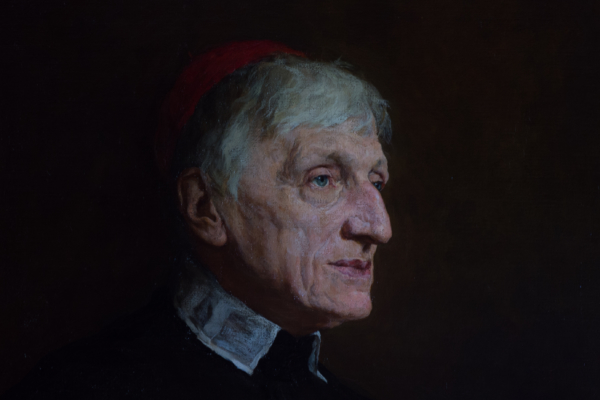 John Henry Newman was born in London on 21 February, 1801, and died on 11 August, 1890. His life, then, spanned nine decades of the Nineteenth Century and all but nine years of the reign of Queen Victoria.  Forty four years of his life were spent as a very committed, active and controversial member of the Church of England, and the other forty five years were spent as an equally committed, active and controversial member of the Catholic Church.

Newman ministered as a priest of the Church of England from 1825 to 1843, famously as Vicar of St Mary’s, the university church of Oxford, from 1828 to 1843.  Subsequent to his conversion to the Catholic Church on 9 October, 1845, he travelled to Rome, where he was ordained a priest of the Oratorian Congregation on 30 May, 1847.

Newman was created a Cardinal of the Roman Catholic Church by Pope Leo XIII on 12 May, 1879, and he was beatified by Pope Benedict XVI at Cofton Park in Birmingham on 19 September, 2010.  His feast day is 9 October, the day in 1845 on which he was received into the Catholic Church by the Italian Passionist priest, Father (later Blessed) Dominic Barbieri.

These are some of the more salient facts of Newman’s life. But who was this man who figured so prominently not only in the religious, but also in the academic, the social, and even the political, life of Victorian England?

He was first and foremost a writer. The great Irish author, James Joyce,  no mean stylist himself, said of Newman that: ‘nobody has ever written English prose that can be compared with that of a tiresome, footling Anglican parson (John henry Newman) who afterwards became a prince of the only true Church.’

Newman wrote over 30 books, there are seven volumes of his sermons and addresses in the standard edition, and there are 32 volumes – each of almost 500 pages – of his letters and diaries. He wrote letters, he wrote sermons, he wrote critical historical works, he wrote controversial religious tracts, he composed hymns. He even wrote verse, mainly religious, of sufficient quality to be included in most reputable anthologies of Victorian poetry. And, of course, he wrote philosophical and theological treatises of enduring religious significance; he wrote two novels: Callista and Loss and Gain, and he wrote the lyrics of the ‘Dream of Gerontius’, which was set to music by Edward Elgar in 1900.

It is hard to overestimate the significance of Newman’s contribution to Victorian life and letters, not only in his own lifetime but also well into the Twentieth Century and beyond.  He was an exact contemporary of Charles Darwin – whose ‘Origin of Species’ he believed constituted no threat to Christianity.  He was a contemporary, too, of the very influential liberal and utilitarian philosopher, John Stuart Mill, in whom Newman detected a drift from agnosticism back to belief in his later years.  He was also a contemporary of the great Victorian novelists: Charles Dickens, Anthony Trollope, George Eliot and William Makepeace Thackeray, and of the politicians and Prime Ministers, Benjamin Disraeli and William Ewart Gladstone. Newman shared the Victorian stage with all these notable men and women of letters and influence.

Newman’s contributions to theological discourse are perhaps his most enduring legacy. His ‘Letter to the Duke of Norfolk’ was a careful exposition of the limits of papal authority in an age of reactionary papal authoritarianism. His 1845 ‘Essay on the Development of Christian Doctrine’, just as he himself was transitioning from Anglicanism to Catholicism, laid down criteria for distinguishing genuine from corrupt developments in the evolution of Christian doctrine. His 1859 essay, ‘On Consulting the Faithful in Matters of Doctrine’, constitutes a plea to the Church hierarchy to take greater account of the informed views of the educated Catholic laity in responding to ecclesiastical and secular issues of the day. He drew upon historical precedents, particularly in the early Church, to show that even where bishops, Church councils and secular rulers were led astray from orthodox Catholic doctrine, the laity stood firm against heresy. His latest substantial work, ‘The Grammar of Assent’ is a serious philosophico-theological tract in epistemology – a theory of the relations between evidence, knowledge, belief and faith. The distinctions he draws between notional and real assent and the priority he continues to assign to the primacy of conscience still have relevance to contemporary discussions.

And then, of course, there are his two most famous works: ‘The idea of a University’ and his ‘Apologia pro Vita Sua’. The ‘Idea’ continues to be cited wherever the purposes and practices of tertiary education are considered.  The ‘Apologia’ vindicated both Newman’s personal integrity and the truthfulness of the Catholic priesthood against the scurrilous attacks of Charles Kingsley.

They say that Toledo steel blades are forged in white-hot fires and hammered into shape by repeated blows. So, holiness is forged in the fires of hardship, suffering and disappointment and hammered into sainthood by the opposition and misrepresentation of critics and naysayers. If these are the criteria for canonisation, then John Henry Newman is eminently qualified. He had to endure a trumped-up charge and conviction of libel in the famous Achilli trial of 1852. His time as Rector of the Catholic University of Ireland was dogged by the refusal of the Irish bishops to cooperate with the initiative. He was under suspicion in many Catholic quarters both in England and in the Vatican for his supposed progressive theology and liberal ideas. His belief that the doctrine of papal infallibility was inopportune further damaged his credibility in Rome and with conservative English Catholics. Even in the Oratorian Congregation which he introduced to England he had to preside over and resolve continuing petty squabbles and jealousies.

It was only finally with the election of the new Pope, Leo XIII, in 1878 that Newman’s fortunes were restored. Almost within a year of his election Leo Xiii created him a Cardinal and made exceptions for him to receive this honour. Only then was the motto he selected for his tombstone: ‘Ex umbris et imaginibus in veritatem’ (‘From shadows and images into the truth’) fully vindicated. The recognition he received in his later years continues to resound down to our own day. Recognised as ‘the Father of the Second Vatican Council’,  the holiness of his life and the acuity of his theological insights will only be further emphasised by his canonisation  by one of his great admirers, Pope Francis, on 13 October.