These events remind us of the life and energy in the Church at those times and the enterprises begun years ago, which have benefited many since, writes Fr Brian McCoy SJ

This week is framed by two historical celebrations involving Jesuits in Australia: the 100th anniversary of Newman College in Melbourne and the coming of Jesuits to the north shore of Sydney (to an area now known as the Parish of Our Lady of the Way) in 1878, 140 years ago. 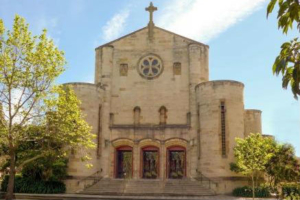 These events remind us of the life and energy in the Church at those times and the enterprises begun years ago, which have benefited many since.

They are less celebrations of ourselves as Jesuits than of two very different communities that grew and developed due to the generosity and support of fellow religious (male and female), lay people, donors and benefactors.

We know that whatever happened in those two ministries, much would not have happened without those who supported them. Neither of these could have been built without the generosity of ordinary Catholics.

Both ministries have continued to grow. Three churches now form the Parish of Our Lady of the Way (St Mary’s, St Francis Xavier and Star of the Sea). Newman, which began with no more than 60 students in 1918, now holds 300.

These events remind us of our Irish beginnings in this land and the leadership in those early days of Fr Joseph Dalton in North Sydney and Fr James O’Dwyer at Newman.

Our living of Catholic faith in Australia has been nurtured and enriched by this tradition and heritage.

We have much to give thanks for: the energy of those willing to begin something new, the vision of those who built in straitened times for a flourishing future, and the resourcefulness of a struggling Irish community that depended on the benefactions of the rich and the generosity of the poor to finance and develop their vision.

The story of the Jesuit contribution to the North Sydney church is told in two books.

Fr Henry Johnston SJ wrote A Seed that Grew: A Hundred Years of Catholic Life on the North Shore, 1856­­­–1956) in a time when the face of the Australian Catholic Church was still recognisable as the largely Irish church of its founding. He describes the growth of that church.

Greg Dening wrote Church Alive, Pilgrimages in Faith 1956-2006 after the changes introduced by the Second Vatican Council had changed the face of the North Sydney community and its church life. As a social historian and anthropologist he was interested in the different experiences of the people who formed the parish.

Newman College: A History 1918–2018 takes a longer view of the changes in the Australian Catholic community from the perspective of young people living in a university college.

In it, Brenda Niall, Josephine Dunin and Frances O’Neill marshall their gifts to describe the diversity of religious and ethnic backgrounds of the students and the more complex and often fraught positioning of Catholics within Church and society.

Anniversaries look back at the road travelled. They also pose glimpses of the path ahead and encourage boldness in taking it. That boldness in faith is the inheritance and challenge left to us in the story of the founders of the North Sydney churches and of Newman College.