New rectors for Jesuit schools in 2018

Three Jesuit schools will have new rectors in place for 2018, the Province announced this week. 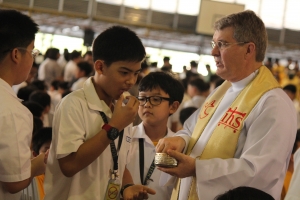 Australian Provincial Fr Brian McCoy and the board chairs from each school sent letters announcing the moves to each school community this week, expressing thanks and appreciation to the current rectors.

Dedication to the magis

In a letter to the Riverview community, Provincial Fr Brian McCoy and Board Chair Mr John Wilcox noted that, ‘Fr Ross [Jones’] preaching and writing, together with his provocation of the magis over the last six years, will leave an enduring legacy at Riverview.’

‘He has had a marked influence at the senior leadership level with both the College Executive and Council. As one of the Province’s key Ignatian educators, he has not only had an impact on those students in his own classes, but has provided much direction on the practical application of the Ignatian Pedagogical Paradigm for all staff.

‘As a priest, Fr Ross has been a critical figure in ensuring the sacramental life of the College community is well provided for and has accompanied many staff, students, parents and alumni on their own spiritual journey.’

Fr Jones, who has been at Riverview since 2011, will be returning to St Aloysius’ College where he was previously rector from 2003 to 2010.

His replacement, Fr Jack McLain SJ, began as part-time chaplain at Riverview in 2013, and became full-time chaplain in 2014. He has worked at St Aloysius’ College and served as rector at St Ignatius’ College Adelaide.

In their joint letter announcing the end of Fr Peter Hosking SJ’s time as rector at St Aloysius’ College, the Provincial and the Board Chair Mr Jock Murray paid tribute to Fr Peter’s pastoral care for the community over his seven years at the school.

‘He has accompanied many students on their journeys into faith and justice through immersions and Kairos retreats. He is known for his care of and commitment to others and is highly regarded for his availability and capacity to listen deeply to the concerns of all.

‘As priest, Fr Peter has provided much of the sacramental life of the community and has accompanied many members from all areas of the community on their spiritual journey. Fr Peter has had a special role in stewarding St Aloysius’ as it transitioned to its first lay principal, Mark Tannock, in 2014.’

The two also welcomed Fr Jones on his return to the school.

‘He is well known for initiating staff, students and parents into Ignatian and pastoral care programs. He has a great capacity for preaching and writing, and an ability to provoke reflection by all members of the community on the ultimate purpose of Jesuit education and how to find God in all things.’

The St Ignatius’ College Adelaide community has been aware that Fr Davoren was leaving since April this year. However a joint letter from the Provincial and Board Chair Dr Suzanne Le Mire reiterated the community’s gratitude for Fr Davoren’s service, and offered prayers for both him and Fr Hosking as they prepared for the move.

The process for selecting a new principal for St Ignatius’ College Adelaide is underway, as the school moves to a new leadership model with a lay principal alongside a Jesuit rector next year.