International Jesuit leader Fr Arturo Sosa has expressed his support for a new Jesuit Social Services program aimed at tackling violence and helping men and boys build better relationships with those around them. 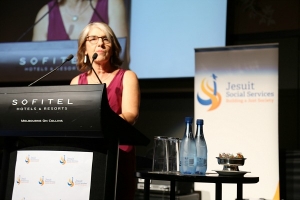 The Men’s Project aims to help boys and men live responsible, accountable and healthy lives, and build loving relationships with those around them.

‘We are going to build on our 40 years of successfully engaging with boys and men who are in trouble, who use violence, who hurt people, to find new ways to help them be accountable and not use violence’, Ms Edwards said.

‘We want women and children and the broader community to be safe, and want men to lead good lives, to be loving and flourish. We want to help lead a conversation about what good manhood looks like, and about social forces that influence that, and we want to work with men to achieve this.’

In a video message, Fr General Arturo Sosa congratulated Jesuit Social Services on their 40th anniversary and gave thanks for its work over the years.

‘As you celebrate your 40th anniversary, it is inspiring to see that you continue to dream of new ways of bringing hope to our violent, divided world’, he said.

‘In particular I wish to express my support for your creative new national program — The Men’s Project — which aims to help men flourish in healthy, responsible, non-violent ways.’

‘More than ever, we need to stand, dream and work together against those who seek to inflame fear, anger and intolerance, rather than hope, hospitality and compassion.’

‘Looking at the young men I work with, and those I have worked with in the past, reminds me of my formative years and how those young men and boys do not have any positive male role models in their lives’, he said.

‘I’m really pleased that Jesuit Social Services has taken this work even further by setting up The Men’s Project, so we can help even more boys and men that we see in our programs.’

Around 450 attended the dinner at the Sofitel Hotel in Melbourne to help celebrate the 40th anniversary of Jesuit Social Services. The evening included auctions and raffles, with Senator Patrick Dodson delivering the Frank Costigan QC Address, and a special live performance from Archie Roach (see separate story).

Find out more about The Men’s Project here.