Mr Peter Coffey has been appointed as the first lay principal of
St Ignatius' College Adelaide. 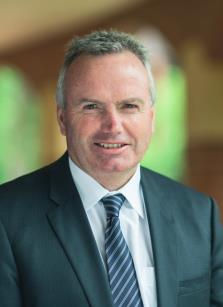 Mr Peter Coffey will become the first lay principal of the school when he takes over from Fr Robert Davoren SJ at the beginning of January next year.

This move to a lay principal working alongside a Jesuit Rector, as happens at other Jesuit schools, was announced earlier this year when the Provincial appointed Fr Peter Hosking SJ to be Rector from the start of 2018.

An alumnus of the College, Mr Coffey graduated from the University of Adelaide with a Bachelor of Economics and a Diploma of Education.

Mr Coffey commenced his teaching career at Saint Michael’s College, a Lasallian school at Henley Beach, where he taught economics, history and R.E and assumed key pastoral roles. In 1993, he spent a year teaching at a mission school in the Central Province of Papua New Guinea before returning to Saint Michael’s in 1994.

In 1995, Mr Coffey joined the staff at Saint Ignatius’ College, Adelaide as Religious Education Coordinator. From this time, he embraced Ignatian spirituality and Jesuit education with great passion. He played a significant role in the major developments which occurred at Saint Ignatius’ in 1996: the completion of the transition into a fully co-educational school, the transfer of Year 7 to the senior school, and the introduction of junior primary at Norwood.

Mr Coffey’s corporate knowledge of the college is comprehensive. During these last twenty-two years, he has served as a year level coordinator, dean of students and administrative dean.

‘Peter is committed to his Catholic faith, and sees his extensive involvement in Catholic education as a key way he can live out his faith in service’, said the joint announcement from Fr Brian McCoy and St Ignatius College Council Chair Dr Suzanne Le Mire.

‘His loyalty to the College, fidelity to the Ignatian charism and involvement with and understanding of the Jesuit world-wide network are critical gifts and experience he brings to this role at this time of transition for the College.’

Mr Coffey will begin preparing for the new role over coming months, with the support of Fr Robert Davoren and the college council.