A new horizon for JCAP

The living out of the faith in such a diverse, multicultural, multi-religious context as Asia Pacific is a big challenge, but means the region has a unique contribution to make to the broader Jesuit world, says JCAP President Fr Tony Moreno SJ.

Fr Tony Moreno SJ assumed the role of President of the Asia Pacific Conference on 22 November last year. While the former Provincial of the Philippines Province is used to meeting and working with major superiors from across the region, he admits he still has a great deal to learn about the many different areas in which Jesuits are working. 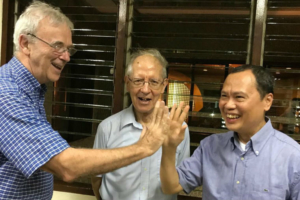 He adds: ‘I have followed essentially what has been set by my predecessor [former JCAP President Mark Raper — himself a former Provincial of the Australia Province]. Fr Raper made so many inroads. Now I am trying to follow through some of the initiatives he started.’

The major superiors’ meeting in Australia at Pymble in January was his first as President. ‘I had a good meeting. It was so reassuring and encouraging to see the support is there.’

One initiative Fr Moreno will be overseeing is the apostolic discernment process the Society is currently undergoing worldwide.

The 36th General Congregation initiated the process of reviewing the apostolic preferences of the Society. Each Province, including Australia, has begun a discernment process among Jesuit communities and lay partners, and the Conferences will be bringing their ideas together.

The major superiors’ meeting in January was the first step in the process for the Conference. While normally major superiors meet twice a year, this year a third meeting will be held in Japan in November to bring together results of the apostolic discernment. ‘It’s a long process and we’re trying to involve as many people as possible — Jesuits and lay people.’

Without pre-empting the results, Fr Moreno says he believes the Asia Pacific region has much to offer in informing this global discernment process.

‘We are very diverse. The great religions are here — Islam, Buddhism, Christianity’, he says. There are also many different cultures across the region. ‘As you go north, it’s a different tradition. In the Malay area, it’s different again. In Australia, it’s another tradition.’

The living out of the faith in such a diverse, multicultural, multi-religious context is a big challenge, but means the Asia Pacific region has a unique contribution to make to the discernment process, says Fr Moreno.

Engagement with China, which is an increasingly important part of the global political, economic and social landscape, will undoubtedly be one of the areas of discernment. ‘We are discerning better options to engage China’, says Fr Moreno. ‘This is a big challenge.’

Another area of interest is vocations; the Asia Pacific region has experienced the blossoming of vocations in several countries, including Vietnam, Myanmar and Timor Leste.

‘In Asia Pacific, Vietnam is one of the fastest growing Provinces’, he says. ‘There is also some modest growth in Myanmar. It is interesting to note that Indonesia, the largest Muslim country in the world, has more than 300 Jesuits, the biggest number in the region.’

Fr Moreno says that in his visits to Australia — including the visit in January — he has seen a number of areas where the Province can provide leadership for the rest of the Society.

‘Your professional standards are a very important contribution to the Society, to the Conference’, he says.

‘Jesuit-lay collaboration is also something we can learn from. Many of your institutions are now handled by lay people. We have a lot to learn from the Australian experience.’

This article is part of a feature that appears in the latest edition of Companions magazine, which focuses on Australia’s engagement with the Asia Pacific region of which it is part.