‘What both Richard (Leonard) and Chris (Gleeson) bring in their books is a very living sense of what can happen through preaching’, said Michael McGirr, who spoke at the book launch at Xavier College on 20 July.

Two Jesuits have launched new books this month that bring together past work and new insights in meaningful ways. 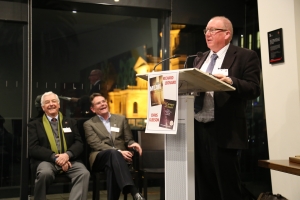 Michael McGirr at the launch.

Fr Richard Leonard’s latest book, What Does It All Mean? Faith’s Big Questions, brings together in one volume his previous three works – Where the Hell is God?, Why Bother Praying? and What Are We Doing on Earth for Christ’s Sake? – revising and restructuring the works and offering a coherent resource for people with questions about religious belief.

Meanwhile, Fr Chris Gleeson has re-released his book A Canopy of Stars, complete with new sections. Along with the eight ‘stars’ in the first edition, the new edition has four ‘canopies’ that each align with one section of the Spiritual Exercises and feature more insights and quotes from wisdom figures around the world and through the ages.

Author Michael McGirr launched the books at Xavier College last week. McGirr, who is the Head of Faith and Mission at St Kevin’s College, said both books offered a valuable resource for anyone seeking to form people in the faith.

‘I said in the St Kevin’s newsletter this week that if everybody were to read both these books – and take them to heart – I could retire and put up my feet’, he said. ‘Everything I would want to bring into the lives of these boys you can find in these books.’

McGirr read out several passages from both books, noting how much could be gained from the wisdom of people like Rabbi Jonathan Sacks and Dorothy Day. 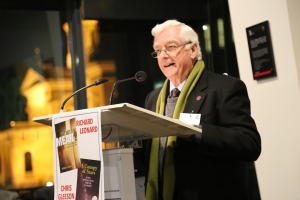 ‘What both Richard and Chris bring in their books is a very living sense of what can happen through preaching’, said McGirr. ‘Richard says quite a bit about preaching, and Chris quotes from a number of his fantastic homilies.’

He noted that many young people have black and white world views – where all problems, whether social or spiritual, need to have solutions. Religion, he says, doesn’t sit well with this sort of thinking.

‘Both of these books – born of a wonderful sense of God in the world and the reality of God – come from that sense that life can’t be put down into a few easy slogans. That actually a neat and tidy answer on an examination, or about a social problem, is not actually what the Christian story offers’, he said.

‘The Christian story offers a deep sense of companionship in the often demanding ambiguities of life. And if you’re not comfortable with ambiguity it’s very difficult to be a Christian.’

Fr Richard Leonard said he’s currently working on his next book, and he promised that it wouldn’t be another ‘question mark book’.

‘My mother keeps saying, “When are we going to stop questions and get some answers?”’ Fr Leonard joked at the launch. ‘The reason why I write question mark books is because they invite people into a conversation. They don’t say, “I’ve got that answer”. They say, “I know the question, and now let me meditate with you in trying to explore where we might go”.’

Fr Leonard also paid tribute to his sister Tracey, who died in March this year just a week after the book was launched in the USA. He said the accident that left her a quadriplegic 28 years ago was the genesis of his first book.

‘I would like to dedicate this book to her, because she taught me more about faith, hope and love than I could ever think was imaginable.’

Meanwhile, a new book from Fr Gerald O’Collins SJ looks more deeply at an aspect of St Augustine’s theology that has often been overlooked.

Right into the twenty-first century, scholars have written extensively on what St Augustine of North Africa (d. 430 AD) taught about the sacraments, the Trinity, and other central themes of Christian faith. But they have neglected the topic of the resurrection of Jesus himself.

Saint Augustine on the Resurrection of Christ (Oxford University Press) by Fr Gerald O’Collins SJ, aims to fill that gap.

When launching the book at Catholic Theological College on 20 July, Dr Barry Jones praised Gerald’s ‘prodigious productivity.’ This is his 68th book, with three more in the immediate pipeline.

Dr Jones praised Gerald for being ‘a master of compression, writing with elegance and wit.’

He suggested a theme for a further study, on St Mary Magdalene and other female witnesses to the resurrection.

A Canopy of Stars, by Fr Chris Gleeson SJ, is published through David Lovell Publishing. It can be purchased here: http://www.paulinebooks.com.au/product/detail.cgi?id=9781863551618

What does it all mean? Faith’s big questions, by Fr Richard Leonard SJ, is published through Paulist Press. It can be purchased here: http://garrattpublishing.com.au/product/9780809106417/

To purchase Fr Gerald O’Collins’ book,Saint Augustine on the Resurrection of Christ, contact cs.au@oup.com or phone 1300 650 616.