We need to get Australia Day right

Hopefully, in years to come, we will discover a particularly Australian space that will celebrate the best of our present Australian life and seamlessly include the great richness of culture and life that Aboriginal people have enjoyed and continue to offer, writes Fr Brian McCoy SJ

I believe that our Australian year begins after 26 January, Australia Day. Summer holidays are over, schools are beginning and many are heading back to work. 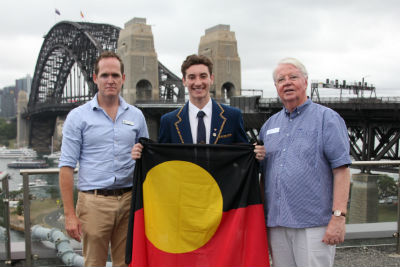 If this is in any way true then we need to get our celebration of Australia Day right, certainly better than we are presently doing, if it is to prepare us, hearts and minds, for the year to come.

Last week, prior to Australia Day, we celebrated a gathering in Sydney of the Major Superiors of the Jesuit Conference of Asia Pacific (JCAP). It was Australia’s turn to host the meeting. Kaleb Taylor opened our meeting with an acknowledgement of the land of the Kuringgai people and a smoking ceremony.

There were some 23 of us at Peter Canisius House for the week, representing the rich texture of the different Provinces, Regions and Missions of JCAP. These are valuable meetings. They remind us of our wider Jesuit mission and the friendships and partnerships we wish to build and strengthen across our Conference and the wider Jesuit world.

Our meeting finished on 26 January and that night we gathered at St Aloysius’ College — along with some Jesuits and lay partners from across the Province — to celebrate a liturgy, led by the recently appointed President of JCAP, Tony Moreno SJ, followed by dinner. The harbour, lights and fireworks provided an impressive backdrop to conclude our week.

Personally, I feel caught in celebrating Australia Day. I can see the value in having a national day of celebration as the year begins. We have so much for which to give thanks, living in this country with all its resources and opportunities.

However, I also identify with those Aboriginal and other Australians who find they cannot celebrate the date of the coming of the First Fleet in 1788 as our national day. I feel their pain, as it expresses unresolved issues of formal recognition of Aboriginal people since 1788 and the mixed blessings of colonisation.

Some 30 years ago, on 25 January 1988, on the eve of the Bicentennial celebrations, the Aboriginal flag was raised at St Aloysius’ College by then headmaster, Fr Tony Smith SJ. The ceremony marked the bicentenary of the last day that Aboriginal peoples enjoyed uninterrupted occupancy of the Australian continent.

This year we remembered that event and once again raised the Aboriginal flag after acknowledging and blessing it at our liturgy with the help of school captain, Oliver Boyle, Rector Ross Jones SJ and Principal Mark Tannock.

We have come a long way as a nation since 1988. Flying the Aboriginal flag is no longer a highly sensitive issue as it was, for some, back then. In this, at least, we can take heart that the journey of reconciliation in this country can and does move forward, however slow that journey at times appears to be.

Hopefully, in years to come, we will discover a particularly Australian space that will celebrate the best of our present Australian life and seamlessly include the great richness of culture and life that Aboriginal people have enjoyed and continue to offer.

We might need more than one day to do that. Perhaps the whole of the last weekend in January. Such a space might not only recognise and respect life in this land before 1788 but also open our hearts in gratitude for the life we now enjoy and which we might more generously share in the year that is to follow.