‘It was their actions and the effect of their “marathon” journey that served to create further ripples of hope and encouragement in their families and communities.’

The ripple effect. I first came across this image in a workshop in Alice Springs some years ago. We were trying to measure the effects on families when good health interventions occurred in its members. 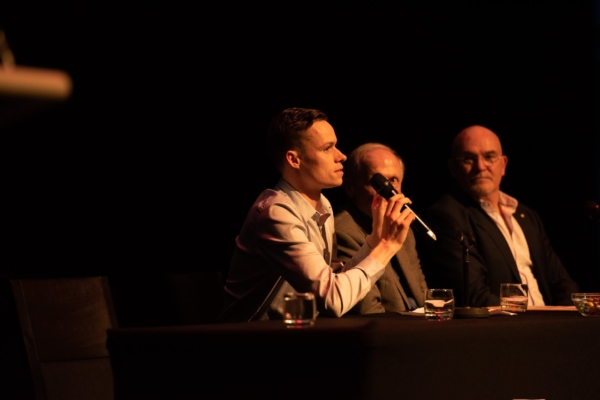 Sean Bourke speaks at the Dare to be Different Forum. Fr Brian McCoy SJ and Robert de Castella listen on.

While we can measure improvement in a person’s physical health, such as in their blood pressure, it is harder to measure the effect that an increase of hope and self-worth in one person can have on their family and friends. Like a stone thrown into a pond we can watch its effect by the movement of the ripples it causes.

Even so, its impacts remain hard to gauge and measure.

I was reminded of this when recently being part of the Daring to be Different Forum sponsored by the Xavier College Social Justice Network. Three of us, Old Xaverians, spoke that night. We shared stories of being enriched by our friendships with Aboriginal people.

Shaun Bourke, who left Xavier some five years ago, spoke of his first time visiting the community at Bourke (NSW) when at school and his pattern of returning several times after he left school to spend time with the youth.

And I spoke of how my life had changed when meeting Aboriginal people for the first time in Victoria in 1970, nearly 50 years ago.

I was fortunate to watch Rob de Castella win the 1982 marathon at the Brisbane Commonwealth Games (I had brought a bus load of Aboriginal protestors down from Townsville, but that is another story). I remember watching his efforts and being touched by his resilience, courage and perseverance.

He described the Indigenous Marathon Foundation as like throwing a rock into a pool and ‘creating ripples’. There have been some 86 graduates of the IMP. Each one of them left their community to face the challenge of learning to run a marathon; something they had never achieved before.

As they learned to overcome the pain and challenge of running further and further, they discovered within themselves a new pride and self-worth. They returned to their communities with renewed courage and self-belief.

They were the rock thrown into the pool. And it was their actions and the effect of their ‘marathon’ journey that served to create further ripples of hope and encouragement in their families and communities.

We can watch with some fascination the ripples on a pond and how they gently move out and are gradually absorbed within the wider context of water. Rob alerted me to a greater awareness of how each of us benefits from the ripples that others have made, and of how we can support others in their hopes and self-belief and allow them to send out further ripples of hope and belief.

I know I am not alone in needing people to encourage me to send ripples of hope and encouragement for others.