The Jesuit Vocations Ministry in Australia seeks to develop a culture of discernment among young people through spiritual accompaniment.

Nine young men from Sydney and Melbourne joined the Jesuits for a discernment retreat at St Peter Canisius House in Pymble earlier this month. 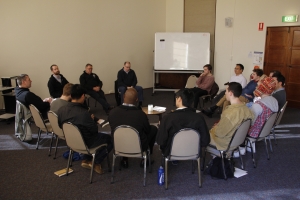 The three-day retreat, from 7 to 9 July, included a series of talks on key Ignatian themes such as desires, discernment and coming to a decision. Participants were also led through guided meditation on the gospels and the Ignatian Examen prayer.

Three Jesuits – a priest, a brother and a scholastic – shared their vocations stories, talking about how they arrived at a decision to enter religious life. There was also an opportunity for individual conversation with Jesuits.

Four of the participants were former students of St Aloysius’ College, in Milsons Point, the Jesuit school on Sydney’s lower North Shore.

One of them, Peter Slaven, who graduated from St Aloysius’ in 2016, said the retreat helped him better look to the future.

‘I feel as though instead of dwelling and panicking over what to make of my future, I am able to ask myself the appropriate questions, sit with them, interpret them, and thus reason with them effectively’, he said.

‘I also went out and bought a journal, and am keen to rip in.’

Sydney University student James Browning said while Ignatius was famously led to his vocation after being injured by a cannonball at Pamplona, not all vocation stories are so dramatic.

‘The retreat helped me realise that learning of your vocation isn’t necessarily a “cannonball” experience – it’s a process that requires active participation in your relationships and environment’, he said.

Asked how the retreat made a difference to his outlook, he responded, ‘I’d say I’m far more relaxed about my future, and have the tools to discern the meaning behind what I will encounter in the near future.’

During the 2016 meeting with the Jesuits in Poland ahead of the 2016 World Youth Day in Krakow, the Pope told the Jesuits, ‘The church today needs to grow in the ability of spiritual discernment.’

The Jesuit Vocations Ministry in Australia seeks to develop a culture of discernment among young people through spiritual accompaniment. This focus is especially important in the light of next year’s Synod of Bishop’s focus on young people living a purposeful life.