The venue features a statue of St Ignatius carved from a cypress tree that was planted in the college grounds in 1934 during the opening ceremony of the Jesuit Novitiate and Retreat House.

On Friday 17 February 2017 staff, students and distinguished and other invited guests gathered to celebrate the official blessing and opening of the Magis Performing Arts Centre (MPAC) at Loyola College Watsonia, Vic., a Jesuit Companion School. 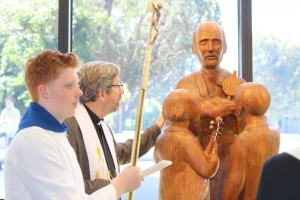 This state-of-the-art facility includes a 500-seat theatre, band, dance, drama and theatre studies rooms, music classrooms and private tuition rooms as well as sophisticated sound recording rooms. It is the result of four years of planning and construction to fulfil a key element of the College Master Plan.

The building is beautifully designed with many features that make it student friendly and education focused and a welcoming place of gathering for the community.

The ceremony began with the entrance of the official party led by altar servers, Justin Coleiro and William McMahon-Puce. The College Captains, Drama and Music Captains were accompanied by staff including Principal Joseph Favrin, members of the College Consult, Head of Performing Arts Michael O’Keeffe and Director of Music, Nicholas Williamson.

All guests were warmly welcomed by master of ceremonies Alison Leutchford, Deputy Principal — Staff and Operations.

Bishop Curtin conducted the official blessing ceremony inviting guests, staff and students to join him in prayer and thanksgiving. Fr Koning blessed a statue of St Ignatius with two Loyola students, one holding a violin and the other a cricket bat, symbolising the college’s commitment to growth of all students, cura personalis, through its co-curricular program.

The statue was carved from a cypress tree that was planted in the college grounds in 1934 during the opening ceremony of the Jesuit Novitiate and Retreat House. All Australian Jesuits who joined the order from 1934–1973 trained in Watsonia.

Guests enjoyed a number of performances including the Loyola Symphonic Band’s rendition of ‘Salvation is Created’ by Pavel Chesnokov, an audio-visual reflection on the construction of the building accompanied by Leonard Cohen’s ‘Halleluiah’, performed by students Sarah Catania and Elizabeth Tomasiello, and a dance performance from the Loyola Dancers led by teacher Lara Thompson. Gemma Hedger directed the Loyola Choir throughout the ceremony.

Stephen Elder officially opened the building, speaking about his own journey as a student in a Catholic school, the significance of nurturing and developing personal talents, and his memories of visiting Old Loyola as a young boy. He concluded by inviting student leaders back to the stage to officially open their facility ‘together’.

Upon the conclusion of official proceedings, all guests were invited to afternoon tea in the Iñigo Theatre foyer.