A love that shows itself in deeds

Michael Musgrave, from St Canice’s Parish in Sydney, recently travelled to Timor Leste with Angela Ford from Jesuit Mission Australia, and two volunteers from Melbourne. He shares some of his experiences of the Jesuit work there. 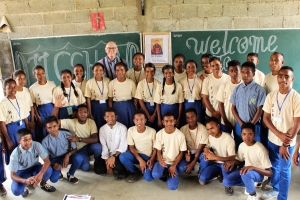 In the eight years that I’ve been involved with fundraising for Railaco Mission, I’ve been grappling with, and trying to enunciate how the ‘pastoral’ and ‘humanitarian’ aspects of our parish’s support intertwine.

My primary motivation for involvement has been to raise money to maintain our commitment to funding ‘humanitarian’ welfare services at Railaco Mission – the children’s feeding program, mobile medical clinic, and secondary school.

To understand the ‘pastoral’ aspect better, perhaps I should have listened more closely to what Fr Steve Sinn SJ said when he was speaking at one of our fundraising events in Sydney in 2013: ‘Our outpouring of generosity is not for reasons of philanthropy, not for honour or esteem; it is for our love of Jesus, a love that shows itself in deeds.’ 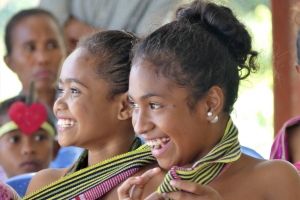 In the lead-up to this latest trip, I spoke with friends and donors about our commitment to continue fundraising. Once question kept popping up: ‘Why East Timor? Don’t we have enough calls on us here in Australia?’

East Timor is only an hour by air from Darwin. The country gained independence from Indonesia in 2002, but it still struggles with many issues. It ranks third on the UN’s World Hunger Index, and is the only nation in Asia in the top 10.

Evidence suggests that education interventions – particularly girls’ education – are one of the most effective contributors to a country’s future development and stability. It could be said that the Jesuits in East Timor are helping to build the nation with their education project, with its two institutions – St Ignatius Loyola College, a secondary school with 600 students in Kasait; and St John de Brito Institute, an adjacent training centre for teachers.

Meanwhile, St Canice’s was instrumental in helping open the school in Railaco in 2004, just two years after the country’s independence. It continues largely through generous donations from places like St Canice’s, which has provided more than $600,000 to date.

Life in the villages 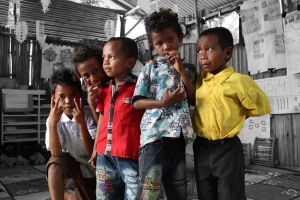 On the drive back from Railaco to Dili, Filipino Jesuit Brother Jeff Pioquinto shared some of his experiences of life in the villages. When he arrived in the country, he spent three weeks at Railaco while he was learning the local language, Tetum. He lived with a family in a village for a whole week, surviving on their simple diet of rice, boiled with cassava leaves and salt. It was an eye-opening experience for him.

‘Health is really a problem’, he says. Government medical services are far away, and they can’t afford the bus fare to go to Dili. ‘When you live with these people, they cry as they tell you how grateful they are for (the parish-run) Railaco Mobile Medical Clinic.’

Education, however, provides a spark of hope for the future.

‘They really want their children to be elevated out of poverty through education’, he says.

Road to the future

A slogan emblazoned on a t-shirt that we were given by CPA (the Jesuit Timorese Audio Visual Unit) proclaims ‘Dalan Ba Futuru’ (‘Road to the future’). The symbol above the slogan is a stylised ‘Stump of Jesse’ with a green shoot as a sign of hope and new life. It’s a symbol that represents all countries that have been conquered and have found freedom again.

Timor Leste has been conquered twice in the past century – firstly by the Japanese, and more recently by the Indonesians. Freedom and independence since 2002 herald new hope.

Our accompaniment of the people of Timor Leste allows marginalised families to grow in community, opportunity and hope. Our impact extends beyond a simple meal, a medical consultation and a class in school. We are building for the future.