‘We love life, we want to live’

'All these initiatives came from the heart of our calling as Jesuits: to be a counter culture.' Fr Steve Sinn SJ reflects on Walking with the Excluded, one of the Universal Apostolic Preferences of the Society of Jesus, and what this looks like in practice in the Australian Province.

Frans Van der Lugt, or ‘Pater Frans’, was a Jesuit priest from the Netherlands who established a community centre and farm near the city of Homs, Syria. There he worked for the betterment of people with disabilities and for harmony among Christian and Muslim people. 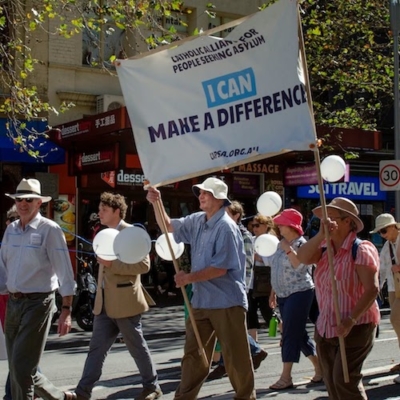 Members of the Catholic Alliance for People Seeking Asylum march in the Palm Sunday rally.

In 2014 he made a number of YouTube videos, asking the international community for help for the citizens of the besieged city.

‘Christians and Muslims are going through a difficult and painful time and we are faced with many problems’, he said.

‘The greatest of these is hunger. People have nothing to eat. There is nothing more painful than watching mothers searching for food for children in the streets … I do not accept that we drown in a sea of hunger … We love life, we want to live.’

Pater Frans refused to leave Homs, despite the dangerous situation. He was shot and killed around 9.30am on Monday 7 April 2014 aged 75.

The call to accompany the oppressed has a pedigree in the Society of Jesus and in our Province that goes back in more modern times to the 31st General Congregation held in 1965. There the call to faith was linked with justice, and all justice is social, all justice involves working for social change.

This insight was an awakening for the Society. Beginning in South America, the Society moved from being aligned with the elites and enjoying their privileges to hearing the voices of the poor.

All over the world there was a breakdown of the old order, a deconstructing of certainties and a challenging of the narratives of meaning that had been captured by the privileged.

The Society was called to leave the corridors of the institutions, to leave that controlled and secure environment, and to live closer to and hear the voices of those outside that enclosed, self-referencing, privileged world.

Jesuits are a missionary order and up to the 1960s going to India was offered as an option for the poor. When that door closed, the Province turned outward in different ways: we set up Asian Bureau and later began to accompany refugees; scholastics backpacked through South East Asia during the Christmas holidays; the Townsville ministry with Aboriginal people was begun as well as the outback ministry in Balgo.

We moved in with homeless, alcoholic men at Corpus Christi Community in Greenvale, Vic., and established 4Flats and the work with young people coming out of prison. Novices were encouraged to feel the insecurity and cold wind of homelessness when they were sent to walk from Adelaide to Sevenhill with no money and no spare tunic.

All these initiatives came from the heart of our calling as Jesuits: to be a counter culture.

I remember Fr Phil Crotty SJ [an Australian Jesuit, former director of Jesuit Mission and member of Hazaribag Province in India] once saying to me that all the Jesuits in India had to have had ‘the village experience’ if they were to be effective in the more mainstream ministries.

Otherwise they would not have anything distinctive to offer the students and the pull of the prevailing culture would be too strong to counter.

To accompany is not to do things for those we are accompanying or to change them. It is to be faithful to them. When I was at St Canice’s in Sydney Fr Pat O’Sullivan SJ used to come every Saturday and sit in the kitchen with the street people as they were having their lunch. He gave them the most precious gift he could give: his time.

Fr Pierre Ceyrac was a French Jesuit who died on 30 May 2012 in Chennai at the age of 98. Pierre served with Jesuit Refugee Service in the camps of Cambodian refugees in Thailand from the early 1980s until the refugees returned to Cambodia in 1993. He once prepared a reflection for the ‘Praying with the Refugees’ website of JRS:

‘Without any merit on my part, I have lived an extraordinary human and religious life for more than 60 years along the borders of millennial civilisations. I have witnessed situations, whether in India or Cambodia, where the forces of evil and the forces of good ceaselessly confront each other.

‘My way of being a Jesuit has become greatly simplified by all that I have lived through in these countries — through experiences of suffering, anguish, undeniable beauty, as well as through contact with the great civilisations and religions of Asia.

‘All this could be summarised in the great axiom of Saint John of the Cross: “My only work is to love.”’

This article also appears in this month’s edition of Companions magazine, which features stories exploring each of the four Universal Apostolic Preferences announced by Fr General Arturo Sosa SJ earlier this year.