Love in an unlovely world

As we become accustomed to the splitting of a globalised order into a more self-centred and divided world, we can identify with the violent and unpredictable society in which St Aloysius grew up and with his search for something more than wealth and success. As his feast day approaches on 21 June, Fr Andrew Hamilton SJ says we can recognise that his is not merely a story told about another age but a life with which we can engage.

This year St Aloysius seems to have stepped out from a stage showing a historical drama into the dress and the language of our own world. As we become accustomed to the splitting of a globalised order into a more self-centred and divided world, we can identify with the violent and unpredictable society in which Aloysius grew up and with his search for something more than wealth and success. His is not merely a story told about another age but a life with which we can engage. 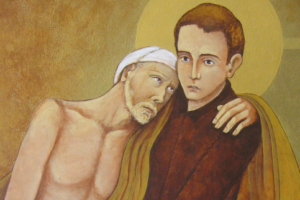 We now realise, too, that Aloysius’ young death from plague was not something that could happen only in a lost past before modern medicine, but something that could happen to any of us. We can also feel the force of the questions he had to ask about how to live during the plague. Should he protect his own health and those of his companions as his Jesuit superiors wanted, or should he volunteer to nurse victims of plague and of other diseases in Rome, as he successfully pressed his superiors to permit him to do?

Similar questions have engaged many people during the coronavirus and the Black Lives Matter campaign. We can now also appreciate better the encouragement that volunteers like Aloysius were able to give to people in Rome, having seen the effect of their ordinary heroism  during the time of isolation in Australia.

Many people have been put off St Aloysius by his apparent rigidity and by the paintings that portray him with lily, finely tailored clerical dress, crucifix and skull. In our changed world he appears in a much more human light. He faced the difficulties encountered by anyone born out of his time and place.

His times were marked by the arrogance of inherited wealth, violence as the preferred way of resolving disputes, and by exploitative, sexualised relationships with women. We have come to recognise how deeply ingrained these attitudes are in our own society and how easily they can dominate relationships between different groups and nations.

If Aloysius wanted something more than what he inherited, found it as a child in an inner life of prayer, and had to express it in the world of the family castle and royal courts, he could not but seem odd and respond in angular ways to invitations to share fully in an ethos he hated. He had to hack his way through virgin forest without a guide.

His last days showed him to be a person of strong feelings, but not dominated by them. He was revolted by the dirt, stink, and nakedness involved in washing the plague-stricken. But in this, as in so much else, he hung in. Ultimately his life was less about leaving an unlovely world but of finding an attractive one in the following of Jesus.

To remember and celebrate the life of St Aloysius, we are sharing on Facebook some of the inspiring stories of selfless and generous people serving those in need throughout the COVID-19 pandemic. Stories will posted over coming days in the lead-up to the feast of St Aloysius on Sunday 21 June. Visit our Facebook page for more.