Listening to language in NAIDOC Week

The theme of NAIDOC this year is Our Languages Matter and the recent census tells us that there are some 150 Indigenous languages spoken at home today. Fr Brian McCoy SJ reflects on his own experiences of learning and listening to Aboriginal languages.

I often remember the time when I drove into the Balgo community (aka Wirrimanu), after some time away. I drove up to the parish house, looking for the parish priest. Nearby was a small group of children playing. I walked up to them and spoke to whom I thought was the eldest.‘Mamangku tjaatu?’ I asked. ‘Where is father?’ 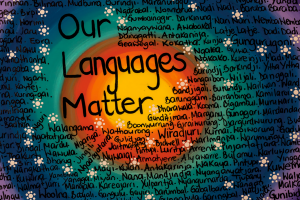 I will never forget the look on her face. She was surprised and appeared shocked! Perhaps it was my poor pronunciation of Kukatja but I sensed it was much more. She was not used to hearing visitors, must less non-Aboriginal people, speaking to her in her own language.

Some decades earlier, when working in an urban parish and being exposed to modern European languages, as opposed to the Latin and Greek I learned in school, I made a promise. While I had a great love for the sounds and rhythms of Italian and Spanish, I promised I would only try to learn them once I had tried to learn an Aboriginal language of this country.

The theme of NAIDOC this year is Our Languages Matter and the recent census tells us that there are some 150 Indigenous languages spoken at home today and that some 10% of Aboriginal and Torres Strait Islander people speak an Indigenous language in their home.

While my present role keeps me away from many of that 10%, I find other ways to warm my interest. I listen when welcomed to country and the words people use. I remain fascinated by so many Aboriginal words we use to name significant places. I love listening to songs in language. I feel more connected to the history and mystery of this land when I hear its ancient words speaking to me.

The great miracle of Pentecost, when many people of differing languages had gathered, was not their ability to speak to one another but rather the grace to hear God’s message in their ‘own native language’.

Next week we gather, as the Jesuits of the Australian Province, for a two-day Assembly. There we will have the chance to allow the Spirit to speak to us, individually and as a group. My prayer is that, in all the conversations we have with one another, we may more deeply hear what the Spirit of God wishes to say to us. We might, like that young desert girl years ago, find ourselves surprised, even pleasantly shocked, to hear ourselves addressed in our own language.