Lifting women out of cyclical debt

Paying approximately 24 times the Australian interest rate was the only option for desperate villagers in Hazaribag, India, until the Jesuit ‘Uplift’ project began.

It’s the middle of the night. Your baby’s temperature is spiking. Her cries are waking the neighbours. You don’t know what to do. You have no medicine and no money. In desperation, you go to the local moneylender and are told your small personal loan of $15 will cost you $20 a year in interest alone.

Paying approximately 24 times the Australian interest rate was the only option for desperate villagers in Hazaribag, India, until the Jesuit ‘Uplift’ project began. The project teaches women to administer a savings group, which lends money as needed within the village at three per cent p.a.

One such loan recipient is Arti. Arti is one of the Dalit people — previously known as the ‘untouchable’ group in Indian society. Dalit people are one of the most disadvantaged and oppressed groups in India, and have endured social exclusion that have left them extremely vulnerable and disenfranchised. 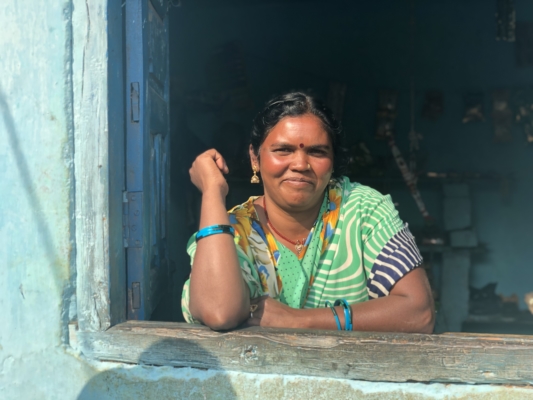 Arti at her shop

Today, they still suffer many kinds of discrimination and exploitation. They have extremely limited access to education and are pushed to the very margins of society. Most have no choice but to take menial, low-paid work, and are denied the very fundamentals they need to survive.

Arti’s situation became desperate when her husband died 15 years ago from kidney disease, leaving her a widow with three children to raise. To survive, Arti worked at the local brick kilns carrying heavy loads of bricks on her head.

When the Uplift program started in her village, she joined with other women to take control of their futures.

The program began when Australian Jesuits in the region saw the dire consequences of local money-lenders. With few places to turn in times of emergency, Dalit people are extremely vulnerable to exploitation, and the money-lenders were offering them small loans at extraordinary interest rates.

One Australian Jesuit explained that to pay off a loan to brick kiln contractors, a person has to work in their brick kiln to pay off the debt. Without knowing when the debt has been paid off, they end up trapped and working for extra months as virtual slaves to the kiln owners until the next monsoon season.

The program now works with 750 families in 50 villages in the region. There are also 30 Women’s Savings Groups, like the one in which Arti participates. The Savings Group members meet fortnightly or monthly and at every gathering, each woman gives around 50 cents per meeting.

This money forms the capital, and after six months, villagers can then apply to the group for small loans. These courageous Dalit women are not waiting to be rescued, they’re uplifting one another and taking control.

After Arti joined the Women’s Savings Group in her village, her life began to change. She borrowed around 3000 rupees (AU$60) and opened a dry goods business that sells, as she says with a smile, ‘everything you want’.

She has already paid back her loan and today carries herself with the confidence of an independent woman who can take care of her family, educate her children and for the first time, make free choices about her future.

The Uplift project offers an alternative to the widespread network of indebtedness and its resultant desperation. The project and its many beneficiaries all began with a modest bequest to Jesuit Mission in Australia. Visit jesuitmission.org.au/our-impact/ for more information.