Cardoner Project participant Callum Blackburn is currently on immersion in Vavuniya, Sri Lanka and will be for the remainder of 2018. He sends the following reflection on his experiences so far.

Leaving the comfort of a relaxed Australian summer and diving into the hustle of a Sri Lankan school semester, where every student and teacher is transfixed on developing their education and English skills, has been both exhausting yet liberating and exciting.

While we have only lived within the Sri Lankan community for a short time, [fellow participant] Billy and I have already come to realise the vast need for education and volunteers within Sri Lanka and specifically the war-affected north of Sri Lanka.

In our short stay, numerous school principals and Jesuits have already contacted us requesting our services within their schools and establishments, as even the mere presence of foreigners excites students and allows them to enhance their English skills.

For this generation of students, English has proved to be vital as it opens up the potential for tertiary education — which is generally taught in English — and, just as importantly, increases the jobs for which they can apply within their area or internationally. 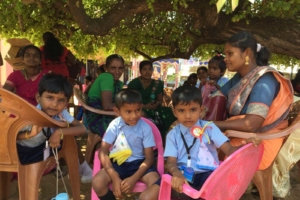 Arriving here, we were immediately put to work in both the local Loyola Campus, a Jesuit-run English teaching facility that has numerous centres all over Sri Lanka, and within the numerous primary schools in the north, organising dances and ceremonies in preparation for the visit of Jesuit Father General Arturo Sosa.

The transition from being a student to becoming a teacher was not as difficult as expected, but we quickly found that preparation was necessary to keep students engaged and that teaching is far more tiring than being a student.

While teaching is tiring, all the students seem motivated in their studies, which not only makes the classes easier but also grants us far more satisfaction as we see them improve and even excel.

During visits to preschools and primary schools throughout the north of Sri Lanka, the devastating effects of both the war and tsunami have become far more apparent. Houses are left abandoned and those that remain are often marked by nongovernmental organisations such as the Red Cross while others still bear obvious damage from the war.

Not having a deep understanding of the history of Sri Lanka, Billy and I have been learning about the civil unrest and difficulties with natural disasters.

This has been through travelling to areas that have been heavily affected, and also through speaking with students and teachers about the personal effect this has on them and their views on the current social, political and economic state of Sri Lanka.

As recently as early March, Sri Lanka was placed under a State Wide Emergency due to conflicts between the Sinhalese and Muslim communities.

Each and every student and teacher we have spoken to has expressed their deep desire for peace. The word ‘reconciliation’ has become a key piece of their vocabulary, some students even making a song about the reconciliation of Sri Lanka and performing it at graduation.

By spending more time speaking with the students we have also discovered a difficulty within Sri Lanka: learning their language. In the north, they speak Tamil, which is made up of the longest alphabet in the world and contains sounds that we have never before heard.

While it is difficult, we have made some progress, and are now able to have simple conversations and to pick up on a few words while listening to others speaking.

Being away from our families, friends and Australian culture has also been difficult, but the warm welcome we have received and the general happiness of the people here has made this so much easier.

In conclusion, our first month here has been incredible and we are excited to become more involved within the community throughout our time here.