'Much is happening but it’s still a huge task on many fronts. Laudato Si’ inspires us but action is the key', says North Sydney Parishioner Michael Gill. 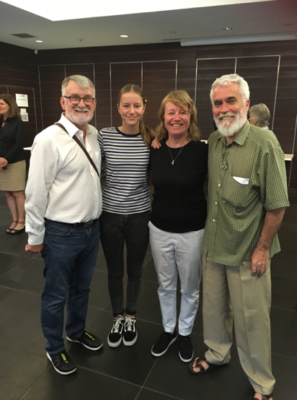 The Mass celebrates the anniversary of Pope Francis’ environment encyclical, Laudato Si’, each year. The special liturgy has been developed by the Parish Ecology Group over the past two years with help from the Parish Music Minister Michael Paton.

Fr Walpole kicked off the conversation after the Mass, exploring the practical aspects of Laudato Si’ from an Australian/Philippine perspective. Fr Walpole is the Coordinator of EcoJesuit, an international network of Jesuits and partners working on ecological issues. He is the Director of Research at the Institute of Environmental Science for Social Change in the Philippines, and the Coordinator of Reconciliation with Creation for the Jesuit Conference of Asia Pacific.

In his contribution to the conversation, Fr Walpole spoke about how Australia impacts on pollution in the Pacific and on coastal inundation of Pacific Island States. He also spoke about how the Adani coal mine will send coal to the Philippines – contributing to that country’s emissions.

Parishioner Michael Gill said the conversation ran strongly for the hour allocated and a little more. A number of groups were represented in the conversation, including local schools and parishes.

‘People spoke of their experiences, frustrations, actions and concerns. Most people – drawn from many groups, no group and well beyond North Sydney – made a contribution’, he said.

‘Much is happening but it’s still a huge task on many fronts. Laudato Si’ inspires us but action is the key. Action includes prayer’, said Mr Gill.

The event was organised by the Ecology Group of North Sydney Parish and the Jesuit Reconciliation with Creation Advisory Group.