To know, love and serve: Q&A with Ramesh Richards SJ

'From a young age, I noticed that the priests stood for something. They were encouraging us to be the hands that feed the mouth of Christ on earth today. The homilies would be about the political situation, but it always left us with hope. That’s what stood out for me.'

Ramesh Richards SJ was one of three Australian Jesuits ordained as deacons in Boston on 15 September 2018. We asked him to share some of his experiences of Jesuit life so far, and what ordination means to him.

Ramesh was born in Malaysia, and moved to Australia in 2005 to study architecture at Melbourne University. He joined the Jesuits in 2010, and spent time as a regent at the Cardoner Project in Sydney and in Jesuit schools. He is currently studying at Boston College.

Can you tell me what led you to religious life, and to the Jesuits in particular? 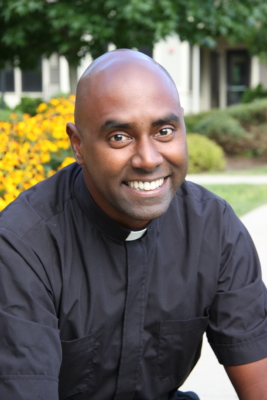 When I was about 12 years old, I was an altar server. The Jesuits came to help in our faith community. It wasn’t a church, because the government didn’t allow us to have a church in that part of Malaysia. So we firstly started worshipping in shop lots, and we then moved to a larger hall.

From a young age, I noticed that the priests stood for something. They were encouraging us to be the hands that feed the mouth of Christ on earth today. The homilies would be about the political situation, but it always left us with hope. That’s what stood out for me.

Moving to Australia, I saw a Jesuit community for the first time. I saw how Jesuits live, was invited to JTC often and also went for weekday Mass at Newman College. I got to meet different Jesuits, and got to see the variety of Jesuits, and felt really attracted to the Society.

I started the proper discernment process with Fr Robin Koning SJ, which led me to join the Australian Province in 2010.

What areas of ministry have you been involved in so far in the Society?

Primarily in schools and young adult ministry, and with international students, in Australia. But since coming to the United States I’ve had a huge variety of experiences: working in hospitals, prisons and retreat-giving. I’ve done a lot of retreat-giving to a variety of ages from 16 years old, to my oldest retreatant at 95 years old.

Of the things that you’ve done, what is it that has resonated with you? What do you feel that God is drawing you towards?

Ultimately it’s to share the love of Jesus with others. It’s to help others to encounter Jesus as a friend, one on one. My role is to step back and assist the person to encounter Jesus directly. And I’ve seen that so many times lately.

What does ordination mean to you?

I will have at least a two-year diaconate, because my ordination has been brought forward by a year. I was the one who asked for it, because I wanted to gain experiences in the United States as a deacon before going back to Australia.

I feel that essentially the role of a deacon is to be a servant. I feel that I’m being called to encounter the Christ that lives in others and to be close to them.

Pope Francis constantly talks about being close to the other, encountering and accompanying the other. That is why I feel as a deacon I can be closer to the people of God, to the Body of Christ.

You talked about the Jesuits you encountered in Malaysia as a young person, and the insights you received from them. What does it mean to you to now be in that position, to be in the same ministry as those men?

It’s unbelievable. There is a sense of unworthiness — and I don’t think any of us are worthy of such grace to share with others.

The grace is meant to be shared. I received it because others shared it. I am very grateful for the Jesuits that I’ve encountered. And it’s not just Jesuits, so many other people, so many lay people, have nourished my faith life and allowed it to develop.

It’s a difficult time to be a priest in the Catholic Church. What gifts do you think that the priesthood still has to offer the community?

I think the most important thing right now is to let go of all the privileges that we have. We need to accompany others. It’s much more than identifying, recognising and acknowledging. It is now accompanying. And I think that’s the only way. Jesus walked with the people, and I think that’s what ministry is today.

It’s challenging, because people might not trust us, and I don’t blame them. But I think people in the pews know who we are, and what we stand for, and our brokenness too. I think our challenge — and more for the Jesuits because we tend to work at the margins — is the people who do not go to church, the people who are not in the pews, who do not know us, and are at arm’s length. I think with the situations that we have today, they are two arms’ lengths away from us instead of just an arm’s length. But I think the call is for us to get off the pedestal, to come down, and be with the people.

Can you talk about a Jesuit who has been an example for you of priestly ministry?

Fr Greg Boyle SJ would be a classic example. Homeboys Industry in Los Angeles, working with gangs. He’s with the people.

He came to Australia when I was a regent and stayed with us at Cardoner. He said he meets hundreds of people every day, and every person that walks into his office — before they walk in he reminds himself that it is Christ that’s going to come into his room. So every time he meets someone in his office he is encountering Christ.

That’s the attitude I try to bring. When I walk into the hospital, when I go into the ward, every room that we go into we have to rub our hands with alcohol. And I find that’s a ritual … like the holy water going into the church – the alcohol is a reminder to me as I clean my hands that I’m going into someone’s space that Christ dwells in.

If you could give some advice for a person discerning their vocation, what would it be?

The only way we can know what that calling is, is through a relationship with Christ. So let’s answer that invitation to encounter Christ in prayer, and through others, and through that to find where we are called to be.