To know, love and serve: Q&A with Kieran Gill SJ

'Earlier in my life I barely knew any young members of religious congregations. Since I joined the Society of Jesus, I have come to meet many young men and women religious. I have been inspired by the various ways in which they serve people in the Church and in the world today.'

Kieran Gill SJ is one of three Australian Jesuits who will be ordained as deacons in Boston on 15 September 2018. We asked him to share some of his experiences of Jesuit life so far, and what ordination means to him.

Kieran entered the Society of Jesus in 2008 and completed his noviceship at Canisius College in Sydney. He studied philosophy and theology at Jesuit Theological College in Melbourne and was a member of the Jesuit community at Newman College while studying secondary education.

He undertook regency at St Ignatius’ College Adelaide, then moved to Boston College in August 2016. He will complete his studies there in May 2019, after which he will return to Australia.

What led you to religious life? Why did you decide to join the Jesuits in particular?

When I was studying at university I met Jesuits and learned about the spirituality, history and ministries of the Society of Jesus. I felt inspired by the Jesuits’ spirituality of companionship with Jesus and by their availability to serve where the needs are greatest. I felt called to enter the Society of Jesus and my spiritual directors helped me to follow this call. I never saw any dramatic bright lights as Saint Paul did, but I felt the call in subtle ways within me. 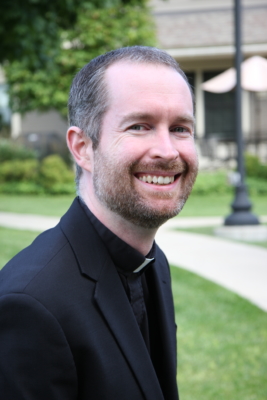 What does ordination mean to you? How does sacramental ministry fit into your idea of your vocation?

What gifts do you think priests have to offer the community?

Priests are called to empower lay people and to support them in their vocations. I think that the biggest gift priests have to offer is the gift of helping people to experience God’s presence in a special way through the liturgy and through the sacraments, especially the Eucharist. This is a grace which priests are called to receive and to freely share. Priests are available to care for people in need and to carry out the works of mercy in so many different situations each day.

Can you talk about a (living) Jesuit who has inspired you or been an example for you of priestly ministry?

I have been inspired by many Jesuits, diocesan priests and other religious priests whom I have known. One of my former local superiors, Fr Paul Mullins SJ, has inspired me with his good example of priestly ministry. He puts his own interests aside to care for others. He preaches meaningful homilies and he practices what he preaches. He has an affable personality and a great sense of humour. I have known so many people who are grateful for what he has done for them and their families in his ministry as a priest in the Society of Jesus.

Can you share a piece of wisdom that a Jesuit has given you that you carry with you?

My novice director, Fr Brendan Kelly, taught me and my fellow novices so much about the importance of praying and encountering the Lord in our experiences each day. I have found this vital in my life and work in the Society of Jesus.

What experiences have you had that made you think that you’ve chosen the right path for yourself?

The noviceship was a time for testing and confirming that you are called to the Society of Jesus. I felt that confirmation in our retreats and our ‘experiments’ — pastoral placements which we did in various Jesuit and church communities. The Fathers and Brothers at the 32nd General Congregation of the Society of Jesus said, ‘What is it to be a Jesuit? It is to know that one is a sinner, yet called to be a companion of Jesus as Saint Ignatius Loyola was.’ I have prayed with that text many times and I know that it is true of me.

During and after the noviceship, I have had many experiences of prayer, pastoral ministry and participation in the Church which have confirmed my desire to be a Jesuit and to be a priest. Sometimes, towards the end of the day, I feel aware of so many other things in this world which I could have been doing that day, and I realise that there is nothing else I would rather be doing on that day than the work which has been entrusted to me as a Jesuit.

How has your understanding of religious life changed since you first joined the Society?

I think my understanding of religious life has deepened through my experiences of living and working with a variety of people. I have known older Jesuits as they come to the end of their lives and I have been grateful to see how fruitful their lives have been.

Earlier in my life I barely knew any young members of religious congregations. Since I joined the Society of Jesus, I have come to meet many young men and women religious. I have been inspired by the various ways in which they serve people in the Church and in the world today.

What has surprised you about religious life?

I have shared so many different experiences of joy and sorrow with a diverse range of people whom I never would have imagined meeting. For this I am grateful.

Furthermore, in recent years I have experienced an international Jesuit and theology school community at Boston College. I have found it a very engaging and vibrant place to be. When I joined the Society of Jesus, I never would have thought that I would personally live in such an international community.

If you could give some advice to a young person discerning their vocation, what would it be?

I would encourage you to find a good spiritual director who can help you to grow in your interior life and help you to notice where the Lord is leading you (Contact the Jesuits and we will gladly help you find a spiritual director). I would encourage you to pray, to receive the Eucharist regularly, and to be actively involved in the life of the church. I would also encourage you to respond wholeheartedly to the Lord’s invitations because I believe that Blessed John Henry Newman’s words are true of every person, ‘God has created me to do Him some definite service; He has committed some work to me which He has not committed to another …’