To know, love and serve: Q&A with Andy Nguyen SJ

Andy Nguyen SJ is one of three Australian Jesuits who will be ordained as deacons in Boston in September this year. We asked him to share some of his experiences of Jesuit life so far, and what ordination means to him.

Andy entered the Jesuits in 2009, and has been studying theology in Boston since August 2016. He is currently completing a Licentiate in Sacred Theology, specialising in liturgy, which he expects to finish in May 2020.

Q: What led you to religious life? 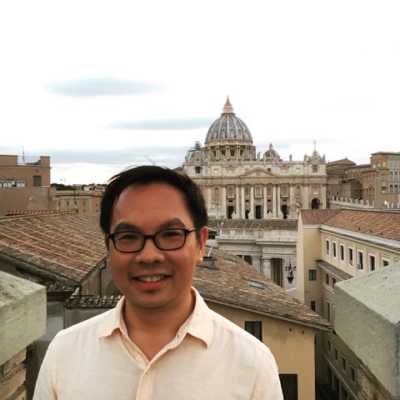 A: Following my graduation from university, I worked at a large architecture firm in Houston. After less than two years, I felt the desire to move beyond the work that I was doing. I went to undertake a post-graduate course in Australia hoping to rekindle the passion I had in architecture that was already somewhat dimmed.

Two years after completing my master’s degree, my life as an architect was still not as I had hoped. Not that architecture was no longer of interest to me, but rather architecture remained all-consuming, and no matter how much I gave, I still found no fulfilment in what I was doing.

I knew that I had gifts and abilities, and that I wanted to be of service to humanity. I knew that I wasn’t really doing that. So one day the idea came to me about putting myself in the service of others, using the gifts that I have. And I thought the best way for me to do this was to join a religious order.

Why did you decide to join the Jesuits in particular?

I first encountered the Jesuits through their publications. In fact it was a postcard that I found among other free ‘advertising’ postcards at university. After some research on the internet, I was intrigued and found a particular attraction to the Jesuits’ diverse apostolates and ministries. I was happy to see the possibilities of putting my gifts to use in the Society in the service of others. Due to various other reasons, it took me three years before I finally entered the novitiate.

In my first year of regency [a period of apostolic activity for Jesuits in formation, between philosophy and theology studies] I worked as a chaplain at Loyola Senior High School and pastoral assistant at Holy Family Parish in Mount Druitt, NSW. For the second year, I was missioned to East Timor (our neighbour to the north) to help with coordinating the design and construction of various Jesuit building projects.

Various areas of ministry are attractive to me. I was always interested in the relationship between the experiences of music and architecture (which was the topic of my post-graduate research topic). Now that I am a Jesuit, this translates into an interest in the relationship between liturgy and architecture, which can generate rather passionate discussions. My hope for the next two years of study is to be able to gain some knowledge that would help me in assisting the church in building its sacred spaces so as to engender beauty and transcendence as well as the full and conscious participation of the faithful.

Sacramental and pastoral ministry is a given for Jesuits, and particularly for those who are priests. I am excited for my future as a priest, celebrating the liturgies and sacraments, caring for people in their times of joy, presiding at baptisms and weddings, as well as being there for people in times of sadness, the deaths of loved ones.

Lastly, my recent experience working with JRS in Nairobi, Kenya, was eye-opening. My limited encounter with refugee families has given me a new perspective on the plight of refugees. There are more than 68,000 registered urban refugees living in the city of Nairobi. The actual population [of refugees] is much greater. Although refugee works can be emotionally and physically draining, I am open to future possibilities in this area of ministry.

What does ordination mean to you? How does sacramental ministry fit into your idea of your vocation?

Ordination is a significant point in the life of a man in religious formation. For me, as a Jesuit, it is not the end of theological formation (since for Jesuits, formation continues until final vows), but more significantly, a development of my identity, to that of a Jesuit priest.

In the sense of service to others, I tend to agree with Pope Francis, who said ordination is a demotion, not a promotion. A priest’s life is essentially about service to God and people. For me, being a Jesuit is a particular way of living my life as a priest. My service to the Church (being both the body of Christ and the institution) is through the Society.

What gifts do you think priests have to offer the community?

This is a very pertinent question, particularly in today’s increasingly secular society, especially in Australia. A priest can offer the gifts of his formation (theological, human, pastoral etc.) to help the faithful community to navigate their complex lives. How can we, as the church, continue to live according to the Gospel, when the world is increasingly hostile to organised religion? How can we address the spiritual hunger and desire for public rituals when Sunday Mass attendance is dwindling?

As Jesuit priests we have the spiritual legacy of St Ignatius, where we look at the world not as something always hostile to our mission, but try to find God’s work in the world and to work with God in it. Thus, we are to accompany others to find God in all things, to help others to discover how God is working in their lives and to nurture their relationships with God.

Can you talk about a Jesuit who has inspired you or been an example for you of priestly ministry?

In my nine or so years of Jesuit formation, I have lived and worked with many Jesuits who have inspired me a great deal, particularly in their ways of living out their priestly life. The common strains that I have found in these men are, first, their availability for the mission; second, their availability and closeness to the people they serve; and third, the depth of their prayer life.

The first quality, availability for the mission, I spoke about in my video interview about St Francis Xavier. He was the first Jesuit who went to the frontier, to seek out new life and new civilisation, where no Jesuit had gone before. Many Jesuits after him have done exactly the same. So did the Austrian Jesuits when they came to Australia in the mid 1800s. And many Jesuits are still doing just that.

I know this is quite general, but I do believe that these qualities are important for Jesuits to strive for in their priestly ministry, wherever they might be and whomever they serve.

Can you share a piece of wisdom that a Jesuit has given you that you carry with you?

A Jesuit once told me that ‘priestly ministry is ultimately about being with people in their best of times and worst of times’. Emphasis on the ‘being with’.

What experiences have you had that made you think that you’ve chosen the right path for yourself?

When I was in the novitiate, I spent about two months in East Timor. During that time, I was asked by the parish priest of our Jesuit parish in Railaco to design the new parish church.

I spent about a day sketching up a schematic design. The design of the church incorporated some features that I thought were vernacular to the area. After we worked together to finalise the design, I handed it over to him and said that it now belonged to the community and they could choose what to do with it.

This was an incredible experience of letting go — letting go of my ideas, letting go of having my name put on the design. Ultimately, the design was not chosen for the final church. Nevertheless, I felt no disappointment in that. I was grateful for the feeling of detachment from the design I had produced.

How has your understanding of religious life changed since you first joined the Society?

This is a big question. A lot has changed in my understanding of religious life since I joined the Society.

Before I entered, my understanding of the vowed life [religious men and women generally are those who have professed three vows, poverty, chastity, and obedience] was limited to the legalistic aspects of the vows. In that sense it seemed more like obligations rather than something that would give me life and greater freedom. This is probably quite common to many religious. But for me, knowing that I am a loved sinner, my vowed life is that of constant reliance on God, on companionship with Jesus, with my brother Jesuits in the community in which I live, and with those whom I serve and work with.

What has surprised you about religious life?

How normal religious are, and I don’t mean just Jesuits. I have a number of friends in different religious orders, and despite our ‘inter-religious’ differences (which are not meant to be negative), we are human beings like everyone else. We enjoy going to the movies or catching up with friends over a coffee. We watch sports, and TV shows like Game of Thrones and Eurovision.

If you could give some advice to a young person discerning their vocation, what would it be?

I would say, be open to God (and honest with yourself too). Don’t be afraid of the surprises that God has for you. Share your thoughts and desires about joining religious life with those whom you are close to and trust. Meet and talk with priests, religious sisters and brothers. Find out what their lives are like. Check out the Jesuits while you’re at it. Speak to me (I am on Instagram @andynguyensj).