To know, love and serve: Q & A with Rob Morris SJ

On the eve of his diaconate ordination, Rob Morris SJ says one of the things that's surprised him on his vocational journey is how God calls people as they are. 'Coming in, I thought that I would have to change fundamentally as a person. And I think I’ve grown more fully just being the person that I am, without having to become someone else.'

In September, Rob Morris SJ will be ordained a deacon along with two of his Australian Jesuit brothers, Alan Wong SJ and Nico Lariosa SJ. Since entering the Society of Jesus in 2008, Rob has studied and worked in Australia and overseas, and is currently finishing his theology studies at Boston College in the United States.

We sat down with Rob while he was in Australia recently to talk with him about his Jesuit journey so far. 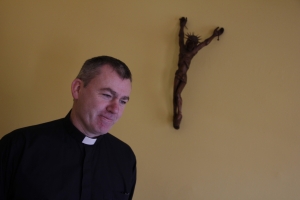 I think the discernment of spirits is a wonderful gift. Ignatius gives us the tools for recognising the different spirits that operate in our lives. It’s very practical in that sense. Our ordinary lives take on a deeper meaning when we suddenly realise we can interpret circumstances or certain events in our lives by looking at them in a theological or spiritual way.

You really experience God’s presence when people open up their own spiritual journey to you. It deepens your own consolation and communion with God. You realise, as weak as we are, and as much as we might struggle to pray ourselves, that God works through us, that we are instruments of God’s work. It’s very humbling in that sense.

Your diaconate ordination means you’ll be able to proclaim the Gospel, baptise, lead people in prayer, witness marriages and conduct funeral services for people. How does the sacramental ministry fit into your vocation?

For me it completes it. I don’t mean that to put the priesthood or ordained ministry above other forms of ministering in the Church. But for me, in terms of my own sense of vocation, I get a sense of fulfilment at the thought of being a sacramental minister for people.

You step back and allow God to work through the sacraments. To be a minister in that is really humbling. It just provides a sense of peace, and great fulfilment for who I am in my life.

Being there for these moments gives you a privileged space in people’s lives. What are your feelings about that?

I guess it’s just really the core of what it’s about. It’s about being Christ for others – not in a profound theological sense, but in a very real, practical way. We can bring, hopefully, the face of Christ to others through a relationship.

And it’s hopefully a relationship of trust. That means a responsibility for the trust that people place in you. We’ve obviously seen how that trust has been betrayed, sadly. But it’s an immensely powerful honour to have that entrée into people’s lives in a way that very few other occupations and ways of life make possible. It’s very humbling, yes. 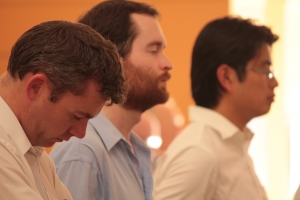 Do you have any role models that you look to in terms of priesthood and priestly ministry?

Before Francis was elected Pope, I was actually drawn to Bergoglio as Archbishop of Buenos Aires. I had read a bit about him – his very simple way of life, his pastoral example, and his depth of spirituality. He practises what he preaches. His simplicity of life, I was really drawn to that.

You talked about admiring the simplicity of life, and practising what you preach. How do you live that in the different places that you find yourself?

That’s a good question… it’s very difficult. I don’t know that I live it as well as I’d like!

I think the key to it is – your prayer life is central to your life as a religious, and our lives as Catholics – but I think simplicity flows from the quality of your prayer life. If God’s at the centre of your life, everything else is secondary to that. So you don’t need things to clutter your life.

I think the vows, obviously, are an important way of living this. More and more you see the vows – chastity, poverty, and obedience – as an emptying. A life-giving emptying, rather than a sacrifice in a negative sense. It’s clearing a space to allow you to be more for others, and to grow as a person. To be freer in yourself. 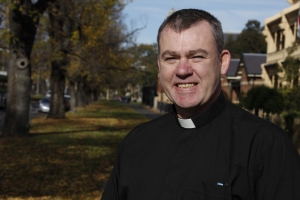 Is there any piece of wisdom that a Jesuit has given you that you carry with you?

I remember I had the privilege of meeting Fr Adolfo Nicolás when he was still the Superior General. I was coming up to regency, and I asked him if he had any advice for a young Jesuit about maintaining a good prayer life.

The simplest advice he gave me was, ‘What do you do to relax?’ I think that’s one of the best pieces of advice.

I always say, ‘Well, am I relaxing? Or am I just approaching prayer as something I have to do? Do I actually relax in the presence of God?’ So that’s a piece of advice that I call to mind quite a lot.

What’s surprised you about religious life? Is there something you weren’t expecting when you entered that you’ve found in recent years?

I came in with a certain idealism of what religious life would be like. The big thing that’s surprised me is the fact that God calls you as you are.

We talk about being ‘sinners but called’, and I’ve become more aware of just how true that is. The more you’re in religious life, the more you see the weaknesses in the Church and your fellow brothers and sisters, but you realise that God is working through them.

Coming in, I thought that I would have to change fundamentally as a person. And I think I’ve grown more fully just being the person that I am, without having to become someone else.

Rob Morris SJ talks about the life of Ignatius, and how the Spiritual Exercises can help someone discerning their vocation.