To know, love and serve: Q & A with Nico Lariosa SJ

Nico Lariosa SJ says ordination, for him, is a way of making the Society's mission - the mission of reconciliation - real. 'Being able to participate and become an instrument of reconciliation, sacramentally, that’s how I see my vocation as a Jesuit priest.'

Nico Lariosa SJ was ordained a deacon on 2 September, along with his Australian Jesuit brothers Rob Morris and Alan Wong. 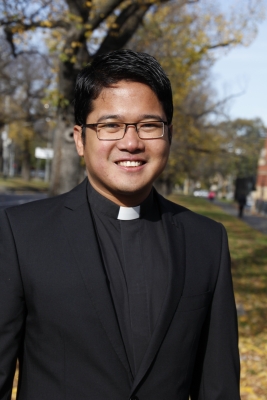 Nico joined the Jesuits on the same day as Alan in 2007, but his journey towards priestly life began at age 12 when he entered the minor seminary in Tabaco City in the Philippines. It was there that he first heard about the Jesuits, and was attracted to their spirituality and approach to ministry.

After joining the Society, Nico studied theology in Melbourne, then secondary education teaching at ACU in Sydney. While in Sydney, he did a teaching regency at St Aloysius’ College, Milsons Point, then headed to Boston to complete his theology and prepare for ordination.

Q: Why did you decide to join the Jesuits rather than continue in the seminary?

When I was 15 and in the seminary, during a retreat, the retreat director spoke to us about the young Jesuit missionary (Richie Fernando SJ) who had died in Cambodia. The story, his humanity, really spoke to me. He was a jokester, he liked to tease people and pull pranks on people. That spoke to me, because I’m that type of personality too.

I just remember saying to myself after hearing his story and later reading a book about his life, ‘Whatever this guy had that enabled him to give up his life like that I want for myself, too’.

Also I loved the music that the Jesuit Music Ministry produced. I was moved by the spirituality of the music and was thinking to myself, ‘Who are these people?’ Because I never thought of priestly ministry in terms of producing albums of music. In the diocesan seminary we had a different culture.

I looked up who was behind the production of the music and it was the Jesuit Music Ministry. At the back of the CDs – and also tapes at that time – there was an address that said if you or someone you know might be interested in the Jesuits, contact the vocations director.

So I contacted them. I was 15 at that time. They said to me, ‘We don’t have a place for high school students, so why don’t you continue what you’re doing, enjoy life, play, pray, study well, and then come back to us when you’re much older.’

So you decided to become a priest when you were 12 years old, and now you’re about to become a deacon. How does it feel to be there?

I never really thought of myself as rushing through formation. I’m one of those people who would take life as it comes. But I think now it feels right. If I had continued in the diocesan seminary, I would have been ordained at the age of 28 or 29. But looking back to when I was that age, I didn’t feel as ready as I am now. I think now, as they say, the time is right. 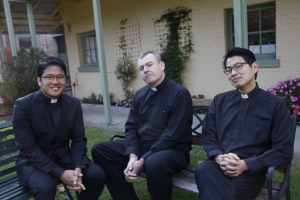 What does ordination mean for you?

You say you feel most strongly called to education ministry. Why is that?

I love the way in which students can keep you accountable and make you authentic. Young people can smell from a mile away whether you’re authentic or not.

For me a school is a place where I can practise spirituality.

Are there any teachers or educators that you’re inspired by?

I could go back to Richie Fernando. He was a teacher in Cambodia. It was a technical school. His pastoral care – his cura personalis as we say in Jesuit lingo, ‘the care of the person’ – was really what spoke to me. He looked at his students not just as numbers in the classroom, but really as people who deserve attention, deserve respect, deserve love and acceptance, despite their disabilities or needs or behaviour.

I tried to remind myself when I was a teacher at St Aloysius’ – ‘What would Richie Fernando do in this situation?’

I think it’s primarily the care of the person that drew me to Jesuit education. And Richie Fernando’s modelling of that. And of course people like (Fathers) Ross Jones and Chris Middleton – I saw them at St Aloysius’ when I was there. The way in which they looked after the staff and students, and the parents. Just accompanied them in their spiritual growth and searchings.

What experiences did you have at St Aloysius’ that made you think that you’ve chosen the right vocation?

One of those experiences would have to be the Kairos retreat. It got me to appreciate students from a different perspective.

In the classroom sometimes you see them as a boys in uniform, trying to get through the curriculum. But then they start telling their stories and their difficulties, and being in that privileged space of vulnerability, and being able to accompany them in that, and sometimes enabling them to find healing in that retreat, I found that very moving. Retreats, I think, were the best experience of my time at St Aloysius.

You have experiences of students who are not interested in religion. But they hear stories like Richie Fernando’s story, or Mother Teresa, or the martyrs of the Church, and they actually perk up and listen.

The challenge for me is how do I present the gems, the treasures of the Church, in a way that will make students understand and listen. And I’ve had moments like that which made me think I’m in the right place. 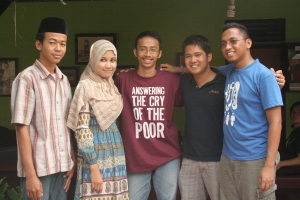 What have been some of the things that have surprised you about religious life?

It’s really the friendships that you make – with Jesuits all around the world, as well as with other people, too.

I grew up Legazpi, a small city in the Philippines. So I never really thought that I’d make friends from all over the world. Now I have friends from Europe, from Poland, Spain, from  North, Central and South America, from Cameroon, from Nigeria, and from all over Asia. It’s just the global friendships that you make because of the universal reach of the Society.

If you could give some advice to a young person who was discerning his vocation to the Jesuits, what would your advice be?

Three words that come to mind, from Mark Twain, I think, ‘Explore, dream, discover’. When I was discerning, (Filipino Jesuit priest) Danny Huang said to me, ‘Explore your options because that will make your decision much freer.’

I don’t believe that you can be 100 per cent sure. Things like this – like God’s revelation – it happens over time. It doesn’t happen as a slap on the back, or as a blinding light, or getting hit by a cannonball in the leg.

But sometimes if we pay attention to our dreams and desires, and how God speaks to us through people, then that’s where I think we will discover our vocation.

Nico Lariosa SJ shares the story of Jesuit teacher Richie Fernando, and talks about how it helped him discover what it means to give your life to Christ.