Justice on the menu at the Jesuit Social Services annual dinner

Keynote speaker Senator Patrick Dodson and musician Archie Roach provided a strong backdrop for an evening that had a strong focus on men's issues. 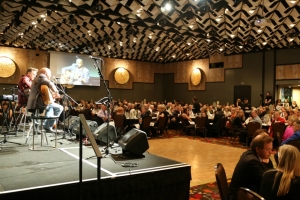 The two leading voices for Aboriginal and Torres Strait Islander Australians provided a strong backdrop for an evening that had a strong focus on men’s issues.

Senator Pat Dodson delivered the annual Frank Costigan QC Address, and paid tribute to the late lawyer’s commitment to improving the justice system, which he said all of us needed to continue.

‘For the vast bulk of [Aboriginal and Torres Strait Islander] people, the legal system is not a trusted system of justice’, he said, ‘it is a feared and despised processing plant that propels the most vulnerable and disabled of our people towards a broken, bleak future.’

Senator Dodson spoke of a recent visit to the Koori Court in Parramatta in Sydney, which offers an alternative justice route for young people.

‘There was a real conversation that impressed me, a proper engagement, a respectful interaction in a setting that tried to make the court more of a conversation, a place where there are agreed rules of respect and truthfulness. The court became an institution closer to the community’, he said. 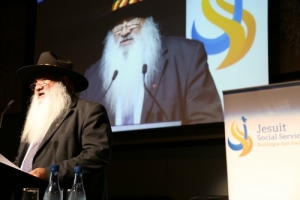 Jesuit Social Services runs a number of similar programs that seek to support young people in the justice system, including Youth Justice Youth Conferencing, which seeks to create dialogue between people who have offended and those impacted by offending behaviour.

Archie Roach, whom Senator Dodson described as ‘the poet warrior’, also said he was pleased to be able to support Jesuit Social Services, given their work with young Aboriginals in the justice system through programs like Barreng Moorop – a diversionary program for young people.

‘I just recently went to Malmsbury (Youth Justice Centre) and talked to the young people there. It’s good to see that people are involved with trying to turn things around and change the system’, he said.

‘These children, they’re already damaged before they go into these lock-ups, these institutions. So they’re already wounded. We need to give them something that’ll help soothe the wounds that have been inflicted on them.’

Around 536 attended the dinner at the Sofitel Hotel in Melbourne to help celebrate the 40th anniversary of Jesuit Social Services. The evening included auctions and raffles, as well as the announcement of a new project called The Men’s Project (see separate story).