'Knowing that Aloysius Gonzaga saw religious life as an inspiring personal way of offering one’s own life for others, we must ask how we can present the Society of Jesus and religious life to young people today as a joyful life choice.'

The 450th anniversary of the birth of St Aloysius Gonzaga is being marked worldwide on 9 March, with a special announcement expected from Pope Francis. 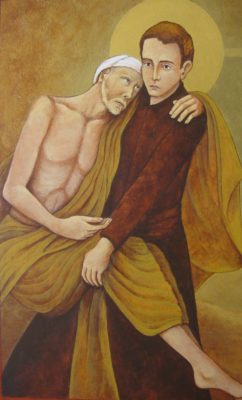 Fr General Arturo Sosa SJ has written a letter to the Society this week to mark the anniversary, and to announce that Pope Francis will be declaring a Jubilee Year of St Aloysius from 9 March 2018 to the same date in 2019.

‘[The Holy See] has identified the Church of Saint Ignatius in Rome, where lie the remains of Saint Aloysius, and all the churches in the world dedicated to this young Jesuit, as privileged places of pilgrimage’, said Fr Sosa.

‘I therefore wish to invite the whole Society, its communities and institutions – many of which bear the name of Aloysius Gonzaga – to find the best manner of celebrating, in a culturally contextualised way, this time of grace, which draws our attention to the rich contributions young people bring to society, the Church and the Society of Jesus.’

Aloysius Gonzaga was born on 9 March 1568 in Castiglione delle Stiviere. Fr Sosa noted in his letter how, when Aloysius was a growing up, letters written by Jesuit missionaries were read out in his home.

‘But his family context was also a worldly one… that promised him a future of wealth, fame and power’, said Fr Sosa. ‘Nevertheless, with a strong faith, an amazing interior freedom, and resisting pressures of all kinds, he sought to be guided by the voice of the Spirit that resonated in his conscience.’

While caring for plague victims in Rome, he contracted the disease himself and died at age 23, while still a theology student. He was declared patron of youth in 1729.

With 2018 being declared a Year of Youth in the Australian Church – and with an October Synod in Rome on ‘Young People, Faith and Vocational Discernment’ and January 2019 World Youth Day in Panama – it is an ideal time to celebrate this Jesuit saint.

‘I am convinced that the Spirit of God continues to call out to many young people, from their faith and from the suffering of the poor of the world’, said Fr Sosa.

‘It is time, therefore, for us to listen to them and ask ourselves how we can help young people grow so deeply in their faith and love for Christ that they may, with a courage similar to that of Aloysius Gonzaga, confront the idols of the dominant culture.

‘Bearing in mind that he died serving people who were not only sick from the plague but also abandoned without hope in the streets of the city and regarded with fear, it is time for us to examine how we, as ministers of the reconciliation that Christ offers humanity, can help young people today to overcome all kinds of fear and anger, often stirred up for political reasons against those who are “different” or “other,” expressing instead welcome, trust, and compassion.

‘Finally, knowing that Aloysius Gonzaga saw religious life as an inspiring personal way of offering one’s own life for others, we must ask how we can present the Society of Jesus and religious life to young people today as a joyful life choice, aimed at serving and giving life to others.’