Many of these children, women and men remain in limbo for years, largely due to Australia’s punitive policies.

At the end of May, Jesuit Refugee Service (JRS) Australia and Jesuit Mission co-hosted a screening of The Staging Post, an Australian documentary about the experiences of Afghan Hazara refugees stranded in Indonesia due to Australia’s border protection policies.

The screening, supported by the Nangami Peace and Justice Group of the Our Lady of the Way Parish in North Sydney, was attended by an audience of more than 130 people, and featured a panel discussion of the most pressing issues concerning people seeking asylum in Indonesia.

Many of these children, women and men remain in limbo for years, largely due to Australia’s punitive policies. Families are often split up, caught between different countries.

Carolina Gottardo, Director of JRS Australia and board member and chair of the APRRN Women, Gender and Diversity Working Group, chaired the panel, and Fr Trung Nguyen SJ (Rector of Jesuit Mission and former Vietnamese refugee) welcomed participants to the event. 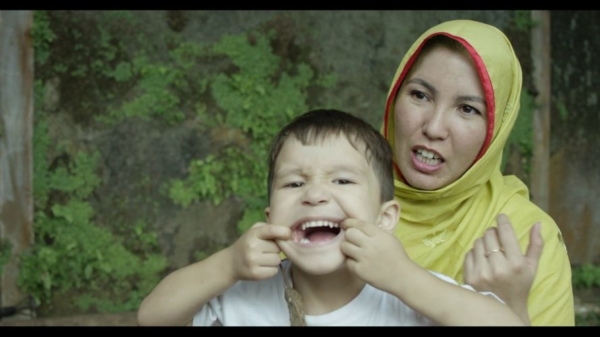 A mother and child who are seeking asylum, as featured in The Staging Post.

Today, Hayat is a third year university student studying international politics. But his route to Australia was fraught.

He was born in Afghanistan but had to flee to Pakistan due to persecution. He returned briefly, but was forced to flee again to Pakistan. Then he went to Thailand, then Malaysia, then Indonesia. While in Indonesia, Hayat attempted to travel to Australia by boat.

On the second attempt, the journey was very unsafe, and the riders ‘thought we were going to die’. The waves were high. They called the Indonesian navy. After six hours, the army finally arrived and took them back to Indonesia. They were detained at an immigration centre for a year.

The conditions were terrible, said Hayat. The police took everything, including his mobile phone. To call his family, Hayat was forced to bribe a guard. This took three months. Hayat’s first call was to his mother. ‘My mother believed me to be dead.’

After the detention centre, Hayat went to a community centre. Then he came to Australia. ‘Australia is a generous country. We can do some advocacy for these people that are stuck there [in Indonesia].’ Overall, as a country, Hayat believed, ‘we can do better’.

The audience applauded Hayat’s honesty regarding the political situation and then listened to the insights of Muzafar Ali.

The constant theme of all the speakers was the realisation that seeking asylum is not a choice, but a matter of life or death. The star of the film, Muzafar, Skyping in from Adelaide, revealed to the audience that he ‘never expected such a rollercoaster life’.

Like Hayat, Muzafar left Afghanistan and fled to Pakistan and then to Indonesia. While in Pakistan, two of Muzafar’s friends were killed by bomb attacks.

Muzafar said that the point of The Staging Post is that ‘refugees are not a threat, refugees are ordinary people’. He explained that he personally ‘had to leave and there are millions of refugees in the same situation – they have to leave’. Muzafar cited a very famous proverb by the Persian philosopher and writer, Rumi: ‘Wherever there are ruins, there are also treasures.’

Also Skyping in on the night was JRS Indonesia’s Lars Stenger, who has been based in Indonesia for 10 years, and so has seen the impact on the changing impact of Australia’s policies in Indonesia.

Working in detention centres, he has seen the talent and compassion of refugees and people seeking asylum who have been forced to live in limbo for years. He said resettlement to Australia has drastically declined. ‘It is becoming more and more of a lottery’, he said.

‘The Australian government has drastically changed the resettlement policy’, agreed Carolina Gottardo, so that it is now ‘almost impossible to resettle in Australia from Indonesia’. Originally, resettlement stood at about 650 places but was reduced to 450, and then to about 100. ‘Australia’s policies have gotten worse and they are having a negative effect on the people in Indonesia.’

Highlighting the need to increase resettlement quotas, Lars articulated the importance of Australia being ‘an example in the region’, arguing that when we refuse to resettle people, ‘other countries in the region follow this example’.