Journeys of sacrifice and generosity

Last week in Melbourne we gathered with Peter Jones to celebrate his more than 50 years as a Jesuit in India. Then, this last weekend at Pymble, we celebrated the first vows of two new Jesuits, Enoch Choy and Tupou Ma’afu. Both were joyful occasions

Last week in Melbourne we gathered with Peter Jones to celebrate his more than 50 years as a Jesuit in India. 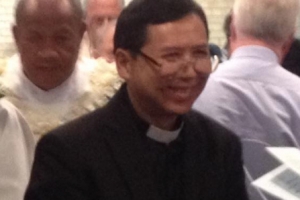 Enoch Choy on the occasion of his first vows

Peter entered the Society of Jesus at Watsonia in 1955, went to India in 1961 and was ordained there in 1967. Peter has been with us here in Australia for some weeks and will shortly return ‘home’ to India.

Then, this last weekend at Pymble, we celebrated the first vows of two new Jesuits, Enoch Choy and Tupou Ma’afu. Jesuits, family and friends came from various parts of Australia and overseas to be with them.

At their vow ceremony, as is now the custom, they were given vow crucifixes of Jesuits who are now deceased. Enoch chose Bryan Buxton’s and Tupou chose Joe O’Mara’s.

Both were joyful occasions, providing family, friends and Jesuits the opportunity to give thanks for these men and the offering of their lives.

These occasions were also opportunities to celebrate the gift of families and to recognise that our Province, built on the generosity of the Austrian and Irish Jesuits, is becoming more culturally diverse than it has ever been.

In these celebrations there was, also, an element of sacrifice, a real sense of lives being generously offered in the service of the gospel and willingly made available for others.

The words of the vows themselves, along with the giving of a vow cross, remain powerful reminders of what we offer when we seek to be companions with Jesus in the carrying of his cross.

In Melbourne and Pymble we witnessed personal examples of sacrifices, offerings of life and talent, made all the more meaningful and joyful in the light of our recent celebration of Easter.

In Melbourne, Peter reminded us of those other Australian Jesuits who went to India as young men and, as he recounted, learnt so much from the people they went to serve.

Both Tupou and Enoch, with family and friends around them, reminded us of our geographical location within the Asia-Pacific region and that we, Province, Church and nation, have much yet to learn from our neighbours.

In Peter, Enoch and Tupou we witnessed past experiences of journey and sacrifice along with great generosity to face those yet to come.

Sacrifice lies at the heart of those who take and live religious vows. It lies in the memory of the Anzacs, which we have also celebrated this week.

Those who offer their lives for others can cause us to pause and ponder the sacredness of life. They remind us of those values we live by and what we, and others, are prepared to die for.

We can be tempted to romanticise the sacrifice of others, avoiding the pain, mess and violence often associated with it.

That is much harder to do with our own. Hence, the miracle of Easter and its effects on the disciples. It does not deny the cross that comes with sacrifice but looks to the promise and joy of the resurrection that follows.