He will work closely with the Provincial, the Ministries Commission, and the chairs and heads of ministry of the Province's major social ministries.

The Provincial, Fr Brian McCoy SJ, has announced the appointment of Professor Jim Barber as Provincial Delegate for Social Ministries, as of Monday 13 February 2017. 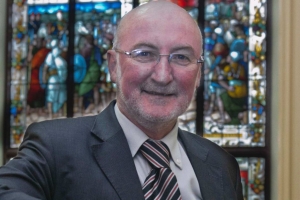 Professor Jim Barber is the new Delegate for Social Ministries.

He takes on the role from Jennie Hickey, who has been fulfilling duties as both Social Ministries Delegate and Education Delegate for the past year. Jim had been working closely with Jennie during the second half of 2016 as a consultant on several projects.

He will now take up the role as Delegate on a part-time basis, for three days a week, at least until the end of 2017.

Jim was a Jesuit scholastic from 1972–79. He went on to an academic career in psychology and social work and has held many roles at universities in Australia and overseas, notably as vice-chancellor at the University of New England (2010–14).

He has researched and published extensively, and has also served on the board of Jesuit Social Services.

As Delegate, Jim will work closely with the Provincial, the Ministries Commission, and the chairs and heads of ministry of our major social ministries — Jesuit Social Services, Jesuit Mission, Jesuit Refugee Service and the Cardoner Project.

In addition, he will work to facilitate: the furtherance of discussions about how the Province’s social ministries might work more effectively and closely together; the implementation of the recommendations of the Task Force on Refugees and Asylum Seekers and of the review of the Aboriginal and Torres Strait Islander Advisory Committee in relation to establishing a Reconciliation Action Plan (RAP); and the implementation of Jesuit Conference of Asia Pacific social ministry priorities such as reconciliation with creation.