Jesus the teacher to the end

‘Lord Jesus Christ, because you broke bread with the poor, you were looked on with contempt.’ A reflection on the Passion story by Fr Ross Jones SJ.

The Passion story at Easter teaches us the core values of Jesus’ mission. Jesus is the teacher par excellence—even, and especially, as the forces of evil close in on him. 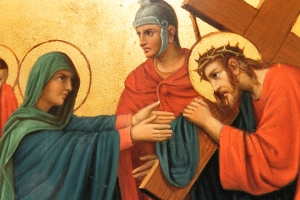 Firstly in his words. It is in John’s Gospel that we find the longest narrative following Jesus’ Passover meal with his friends, the Last Supper. At times I find it a rather rambling monologue—it stretches over five whole chapters. But at one point Jesus becomes very succinct. Now it is not unreasonable to suggest that, with death staring Jesus in the face, his last words would be carefully chosen.

During that last meal Jesus had with his friends, he left only one commandment—to love one another. ‘Remain in my love,’ was his exhortation. Simple as that. No long list of laws. No lengthy moral code. Just ‘Love one another just as I have loved you.’

That naturally prompts the question, how did Jesus love his friends? Well I think like this: By comforting them. By lifting burdens from them. By relieving their illnesses. By freeing them from whatever made them less human. By washing their feet. By simply being prepared to spend time with them. By giving of himself selflessly. By dying for what he believed in and for those whom he loved. That is the model for loving that Jesus offers. That is the core of Jesus’ Passion teaching.

Secondly, Jesus underscores something quite significant in what he does during his Passion. He teaches by example. As Ignatius says, ‘Love is expressed in deeds more than in words.’ So has Jesus’ whole ministry been characterised by action, by service, by compassion, by going out to the other. The same core values that we promote among the boys here at St Ignatius’ Riverview. Look at the way in which, at a time when he could rightly be preoccupied with his own fate, Jesus still continues to be drawn to healing and reconciling others along the way of his passion. Let me remind you of a few of the obvious examples.

Firstly, in Luke’s account of the happenings in Gethsemane, the disciples see what is about to happen, and they ask, ‘Shall we use the sword?’ Before waiting for the answer, one of them cuts off the ear of the High Priest’s servant. But Jesus says, ‘No more of this!’ Then touches the man’s ear and cures him. He heals the enemy.

Secondly, also in Luke’s account, we are told that many women were following him, beating their breasts and wailing, in the manner we see today among middle-Eastern women facing tragedies and deaths in their war-torn villages and towns. They are women who have long supported and cared for Jesus on his mission. Now he stops to comfort them in return.

Thirdly, and in Luke again, we hear how Jesus is led to the place of The Skull, to be executed. In his agony, he still manages to pray for his persecutors. ‘Father, forgive them, for they do not know what they do.’

Fourthly, in Luke once more, nailed between two criminals, Jesus is cursed by one and affirmed by another. The so-called Good Thief asks to be remembered when Jesus comes into his kingdom. Jesus offers him an assurance, a promise of redemption. ‘Truly, you will be with me today in paradise.’

Finally, and this time from John, we are told that four women and his favoured disciple, John, are with him at the cross. We further see the tender care he has for his mother. At death’s door, he is concerned for her welfare and entrusts her to John. ‘Woman, this is your son.’ And to John, ‘This is your mother.’

There, in the throes of fear and failure, and enduring a pain most of us would never know, Jesus continues to heal, to comfort, to forgive, to console, and to care. In the very crucible of his Passion, Jesus continues to teach by word and then by deed. He dies as he has lived.

As we eat the Easter bread this week, broken for us as Jesus was, let us pray, considering the significance of this meal: 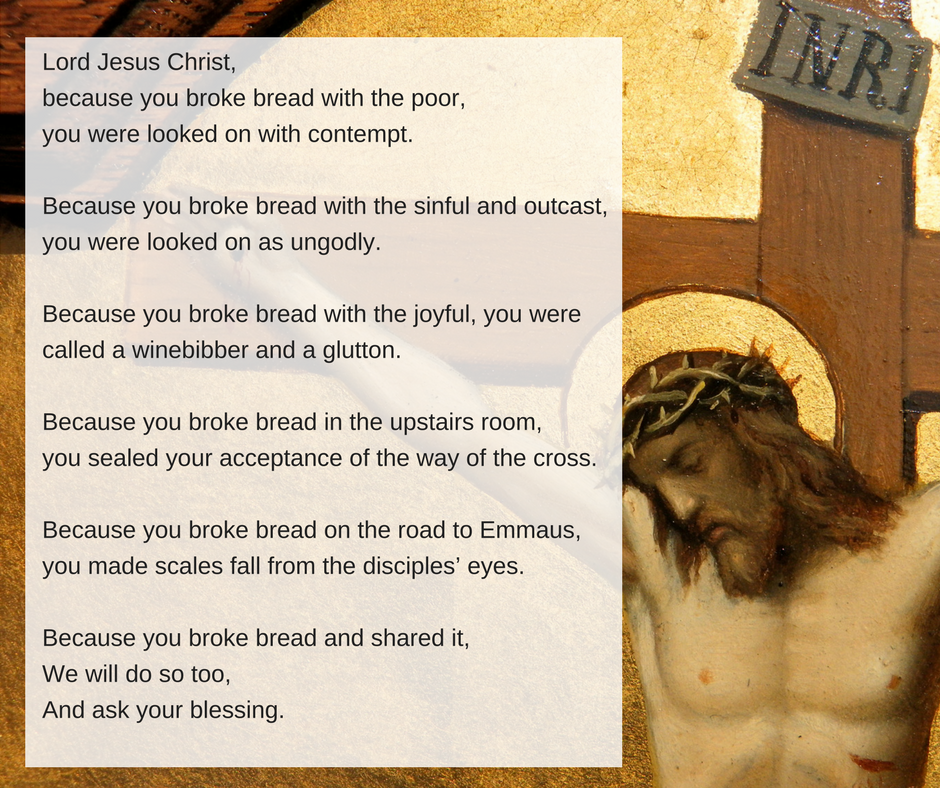