Jesuits to leave Toowong Parish at the end of 2017

After more than 100 years of serving in the parish, the Jesuits will be withdrawing from St Ignatius Toowong at the end of this year.

Australian Provincial Fr Brian McCoy announced last weekend that the Jesuits will be withdrawing from St Ignatius Toowong in Brisbane at the end of 2017. 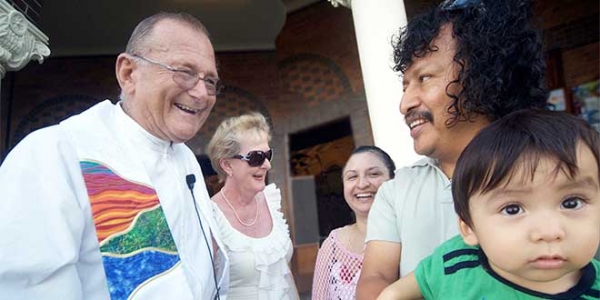 The Parishes Task Force was set up more than 18 months ago to respond to the increasing difficulty of finding Jesuits to serve in all nine parishes across the country. Led by the Province Delegate for Parishes, Sr Libby Rogerson IBVM, the task force was asked to discern and develop criteria for remaining in or withdrawing from a parish, and then to make recommendations for the Provincial and Consult.

Fr McCoy was in Brisbane last weekend, meeting with the Jesuits, the Parish Council and a group from the parish on Friday evening to inform them of the decision to leave St Ignatius Toowong. He then made a formal announcement at each of the Sunday Masses, in a homily which noted his own connection with the community there during the time he was working among the Torres Strait Islander people in Townsville.

‘In 1979, at the age of 31 and ordained less than two years, I was missioned to work in Queensland’, he said. ‘While living a long way north of Brisbane we formally belonged to this Toowong Jesuit community and would regularly visit the parish and community on our travels north or south.’

‘Personally I find it both sad and difficult to announce that we Jesuits will be concluding our ministry in this parish at the end of this year.’

Fr McCoy paid tribute to the life and work of the long-standing parish priest Fr Peter Quin SJ, who died late last year. He said the decision was not based on the sad reality of Fr Quin’s death, but on the reality that the Province does not have enough men to serve as parish priests for all its parishes.

He said that he hoped the parish would continue to have strong connections to the Australian Jesuits.

‘One thing that we are committed to doing over the coming months – and confirmed on Friday night – is to see how Jesuit and Ignatian connections may continue and be further strengthened’, he said.

‘The outreach and resources of the Faber Centre of Ignatian Spirituality will form a very important part of those discussions.’

Parish representatives read out a response to the announcement, noting that the news may not have been unexpected but that it was still difficult for many.

‘In this time of grief and shock it is important for us to remember all the blessings and gifts we have been given by the Jesuits over a century’, the statement read.

‘While we mourn the loss of the Jesuits who have nourished and served us for over 100 years, we are now invited to personally embrace this heritage of Ignatian spirituality and to share it with one another and the wider community – to be an Ignatian light for the people of Brisbane.’

The Parishes Task Force, led by the Delegate for Pastoral Ministry, Sr Libby Rogerson IBVM, has been meeting regularly for more than 18 months to look at our parish commitments in light of the fact that finding Jesuits to staff nine parishes is overstretching us. I asked the Task Force to discern and develop criteria for remaining in or withdrawing from a parish, and then to make recommendations to me and the Consult concerning the difficult decisions to be made.

I have now made the first of these parish decisions. This past weekend, I was in Brisbane, together with Libby Rogerson, to publicly announce the withdrawal of the Jesuits from Toowong parish by the end of this year. On Friday night we met with the Jesuits, the Parish Council and a wide representative group from the Parish to inform them of this decision and to discuss how best to implement it in a way that is as helpful as possible for those who experience this as very sad news. The Vicar General of the Archdiocese was also with us. I then preached at all the Masses, announcing this decision in my homily, and was available, along with Libby, to speak to people after each Mass. In the light of our Friday night meeting a representative parish group also prepared a gracious statement of response which was read after Communion at each Mass.

This is a painful decision for me personally, as it certainly was for the parishioners, and as I’m sure it will be for many Jesuits as well as others associated with us. One issue that the Task Force looked at was how we could continue to support parishioners in terms of their ongoing engagement with Ignatian spirituality. Faber CIS in Brisbane will be a very helpful resource here, with its well established team of spiritual directors.

Please pray for the parishioners, and for Fathers Stan Lim and Gaetan Pereira in the parish, and their superior John Reilly, as this difficult decision is implemented over the rest of this year.

Full response from the parish representatives:

I / We have been asked to say a few words in response to Fr Brian’s announcement at today’s Mass.

Firstly, we’d like to thank Fr Brian for being with us at this Mass. It is never easy to be the bearer of bad news, and we appreciate your time and your visit, Fr Brian, in order to let us know about this decision at your earliest opportunity.

Although this news today may not be unexpected in the time following Fr Peter’s death and the declining numbers of Jesuits in this country, this announcement is still difficult for many of us.

In this time of grief and shock it is important for us to remember all the blessings and gifts we have been given by the Jesuits over a century. It is a time for changes and challenges and we need to be as courageous as the Jesuits are, and put our spirituality into practice by helping and supporting one another.

As members of St Ignatius Parish and the ‘extended Ignatian family’, we gather each weekend for Eucharist and we pray in our Mission Statement, to ‘live out our Christian vocation in the spirit of St Ignatius’. Ignatian spirituality is a precious gift that the Jesuits have shared with us during their time in Toowong, each priest in his own unique way.

However, Ignatian spirituality is broader than the Jesuit spirituality embodied in the Society of Jesus, and in particular in the Jesuits we have known and loved. So, while we mourn the loss of the Jesuits who have nourished and served us for over 100 years, we are now invited to personally embrace this heritage of Ignatian spirituality and to share it with one another and the wider community – to be an Ignatian light for the people of Brisbane. We are like the disciples who grieved the loss of Jesus, who waited fearfully, but who then experienced his Spirit, consoling them, enflaming their hearts and empowering them for mission.

We are the Parish of St Ignatius at Toowong and Auchenflower. We are the greetings at the door, the smiles across the aisle, the altar servers who take the hand of any priest during the Our Father, the choirs, the handshake when peace is offered. We are not leaving, we will remain. And we that remain can choose to come together and decide how our community will grow into the future.

We need to follow the example of Fr. Peter Quin and the other pastors who have ministered to us so faithfully as we pick up the staff, look forward and make the best of the opportunities that this change, though painful, offers us. May St Ignatius continue to Bless Us.