Fr John Wilcken SJ has retired following more than 30 years of service to the homeless and vulnerable women at McAuley House in Flemington Road, Melbourne.

Fr John Wilcken SJ has completed over 30 years of service to the homeless and vulnerable women at McAuley House in Flemington Road, Melbourne, and has now retired from his work there. 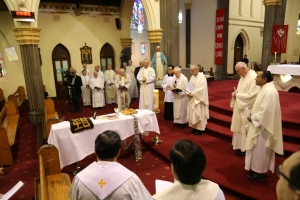 Fr Wilcken, who has also lived for many years at Corpus Christi Greenvale while teaching theology at the United Faculty of Theology in Parkville, celebrated Mass each week for the women living at McAuley House.

Until recently McAuley House was known as Regina Coeli. The site in Flemington Road was bought in the 1930s by the Mercy Sisters for an orphanage. It later became a residence for homeless and vulnerable women, the counterpart of the neighbouring Ozanam House, which welcomed homeless men.

The Mercy Sisters continued to serve and administer the hostel. They also joined Jesuits in providing for homeless and vulnerable men at Corpus Christi Greenvale.

The two institutions formed part of a broader, street-wise and loosely coordinated service to homeless people offered by the Missionaries of Charity Sisters, Daughters of Charity and Sisters of Charity in Fitzroy, and the Way community, ensuring that the streets remained the focus of Catholic ministry to the homeless.

In an article in Madonna magazine, one of the women who spent time at Regina Coeli captured the gift that the Mercy Sisters were to so many people there. She wrote:

‘A conversation with a mercy nun was like a spider web that would sparkle in the sunlight, catching our words and giving us cause for reflection. Their love was more than a Band-Aid, they gathered the crumbs of our souls and you could eat their smiles like slices of fresh watermelon on the table. They had dogs and wore boots and drove utes.’

McAuley House has now moved to Footscray, as part of McAuley Community Services to Women. The transfer provided the occasion for the conclusion of Fr Wilcken’s long and faithful service.

He received a letter of thanks and appreciation from McAuley Services. It said in part, ‘Your ability to create a prayerful experience, and to remind us of God’s love and providence, has been a significant factor in bringing peace, healing and hope to many women.’