A Call to Mission: A History of the Jesuits in China 1842-1954 is a first in publishing on China, bringing together 15 years of research and writing across three continents to provide a comprehensive look at the second phase of the Jesuit engagement in China.

Fr David Strong SJ’s new two-volume history of the Jesuits in China was launched in North Sydney on 19 February.

A Call to Mission: A History of the Jesuits in China 1842-1954 is a first in publishing on China, bringing together 15 years of research and writing across three continents to provide a comprehensive look at the second phase of the Jesuit engagement in China.

Over that century, more than 1200 European and American Jesuits were joined by up to half that number of Chinese entrants to the Order. They worked across China until the new Communist government expelled the foreigners and imprisoned most, if not all, of the Chinese. 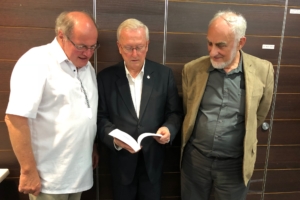 Fr Kelly says the book is ‘essential reading’, particularly in the light of the current negotiations between the Vatican and China.

‘The singular merit of this work is the comprehensive nature of its coverage of the life of the Jesuits and the Church in the most convulsive century in Chinese history’, he said.

‘No less than six major eruptions of social and political unrest in this period ripped an ancient civilization out of cultural and political patterns that prevailed for over two millennia.

‘The author’s access to the impacts of these convulsions at a local level – through the diaries and letters of the Jesuits stationed across China in cities and villages – give the history a taste for what life was like in villages and cities.’

Much has been written on Jesuits such as Matteo Ricci, Ferdinand Verbiest and Adam Schall von Bell, who were part of the first stage of Jesuit impact on China in the 17th and 18th centuries. This book shifts attention to a neglected period of Catholic and Jesuit engagement with China – the almost 120 years from the second arrival of the Jesuits.

‘The Jesuits were the first multinational to be welcomed in China and they came with a specific method of engagement – to make friends, build relationships and share their gifts before anything else was transacted, including conversations about Christianity. It remains an unsurpassed method of engagement with a rich and ancient people’, said Fr Kelly.

‘But the second arrival – from the 1840s – was very different. It was made possible by the arrival of European governments and traders, many of whom came not just for financial gain but to spread their “superior” religion.

This work by David Strong in two volumes is the first major treatment of the period from the arrival of the European and eventually American Jesuit missionaries under the protection of the so called Unequal Treaties through to their expulsion after the Communist victory in the long-running civil war in 1949.

To purchase the books go to: