‘Unfortunately, violence against women and girls is endemic. It affects women seeking asylum in very specific ways as a result of the multiple layers of discrimination that they face on the grounds of their gender, race and migration/asylum status’, said JRS Australia Director Carolina Gottardo. 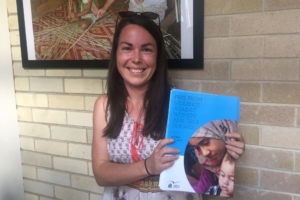 Launched in November at the opening of JRS’s new offices in Westmead, Sydney, the report highlights the unique vulnerabilities and needs of women seeking asylum when it comes to these issues.

‘Unfortunately, violence against women and girls is endemic. It affects women seeking asylum in very specific ways as a result of the multiple layers of discrimination that they face on the grounds of their gender, race and migration/asylum status’, said JRS Australia Director Carolina Gottardo.

The report’s launch coincided with the International Day for the Elimination of Violence Against Women, and the 16 Days of Activism campaign. JRS noted that until now, the experiences of women seeking asylum have been missing from broader public discussion on gender-based violence.

JRS Project Coordinator Stephanie Beckwith was the main author of the report. ‘We wanted to hear from the women themselves about their experiences and how their experiences of gender-based violence have impacted their journey of seeking asylum and in accessing support services in Australia’, she said.

To complete the report, JRS Australia conducted 10 in-depth interviews with women experiencing gender-based violence. Additionally, a round-table with service providers from the domestic violence sector and asylum sector highlighted the challenges in supporting these women.

‘We are finding in our work that it is particularly difficult to find access to specialist services for this group of [asylum seeking] women’, said Ms Beckwith.

Common issues include lack of income and a lack of access to housing and community services. Additionally, these women fear the threat of deportation and/or violent repercussions for reporting cases of domestic violence to the police. Such fears are not unfounded, with women in some cases being forced to return to potentially dangerous situations in their countries of origin.

‘Sometimes you have this big problem … And then you have another problem, like sexual violence or … maybe you’re beaten by your partner or your husband, so your mind becomes so much occupied by this asylum seeker thing, you end up thinking these other ones are … not as serious … Because seeking asylum is about … your life. So, it occupies your mind.’

The report also revealed that past trauma can prevent this group of women trusting authority figures in order to seek help. Many asylum-seeking women were raped when they lived in refugee camps.

In response to the needs highlighted in the report, JRS Australia is launching a new three-year Finding Safety project, funded by Women NSW. The project will involve creating a women’s only space for refugees in Parramatta.

Click here to read the full report, Free From Violence Against Women and Girls (VAWG).