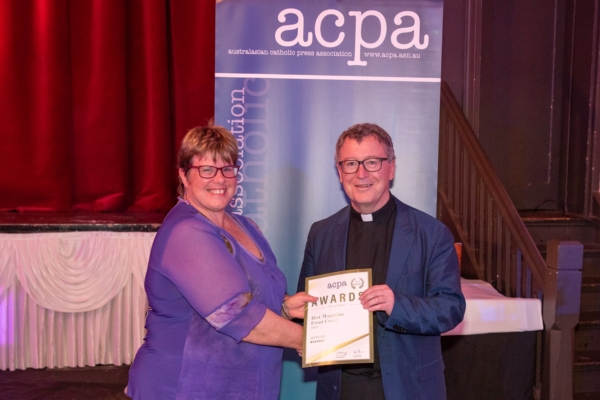 ‘Eureka Street has over many years provided a thoughtful contribution of relevance, currency and orthodoxy, which represents and reflects to its audience core Christian values at a time when these are very much questioned, threatened or distorted in the discourse of our communities.’

Eureka Street’s Celeste Liddle won a bronze award for Best Columnist from ARPA, while sister publication Australian Catholics won a bronze award in the category Best Feature — Multiple Authors for ‘Strands of Spirituality in the Catholic Church’, which featured in its Summer 2018/19 edition.

At the Catholic awards, held this year in Bathurst, NSW, in addition to Madonna’s win for Best Cover, Eureka Street was awarded Best Layout and Design — Online Publication, and the Australian Catholics Spring 2018 feature ‘How do you pray?’ was Highly Commended as Best Feature — Multiple Authors.

Eureka Street also received a Highly Commended in the Best Headline category for ‘Dress sense or political statement? It’s a tie’, the headline having appeared on a tongue-in-cheek reflection on politicians and their choice of neckwear.

‘At a time when Catholics and other Christians struggle for voice in the public square, these awards demonstrate the value that our Jesuit publications bring in presenting a Catholic and uniquely Ignatian perspective on the issues of the day’, said Monika Lancucki, Director of Jesuit Communications.

‘This can be difficult territory to navigate and I’m incredibly grateful for and proud of the efforts of the Jesuit Media team and all our contributors, who grapple with these challenges on a daily basis to bring readers content that is topical, relevant, fresh, engaging, challenging yet respectful.’