In 2019 Elijah Slavinskis, star of the Sydney production of Charlie and the Chocolate Factory, raised over $4000 to help marginalised people living in East Timor.

Eleven-year-old Elijah Slavinskis is proof that age is no barrier when it comes to putting faith into action.

One of the youngest supporters of Jesuit Mission Australia, Elijah is a gifted young man who has just starred in the musical Charlie and the Chocolate Factory in Sydney. But it’s not just Elijah’s voice that’s remarkable, he has a compassionate heart to match.

In 2019, Elijah raised over $4000 to help marginalised people living in East Timor. 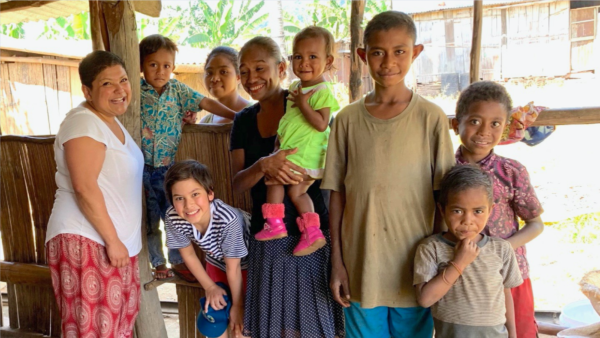 Elijah with his mum Lynda on his immersion trip to Railaco, Timor in 2019.

At Mass at St Canice’s, a Jesuit parish in Sydney, back when Elijah was just eight years old, he heard a Riverview student speak about his immersion experience in Timor. He was very inspired and, ever since, has wanted to go on an immersion trip to Timor to visit projects supported by Jesuit Mission. When his trip was confirmed in 2018, Elijah swung into action.

He started fundraising for the children in Timor. He organised a ‘Staff vs Students’ soccer match at his school, sold homemade body scrubs, and made an inspiring speech at his local parish.

During his trip to Timor in 2019, Elijah visited the remote villages of Railaco and participated in St Canice’s supported programs, including the Mobile Clinic and the Feeding Program. Elijah quickly connected with people in the community, where he ate and played like a local.

Upon returning home, he’s continued his fundraising efforts, including an online fundraising campaign.

A big thanks to Elijah and all the passionate, committed people in the Jesuit Mission family, who raised funds in 2019 to support our vulnerable sisters and brothers living overseas.