Jesuit and lay 'co-missionaries' for Christ

Fr Brian McCoy SJ reflects on the Maytime Fair and what it tells us about lay and Jesuit collaboration.

When overseas Jesuits visit Australia, they often comment on the way in which lay people and Jesuits work together in our ministries. We are seen to be breaking new ground in this kind of collaboration, which recent General Congregations have so strongly endorsed. Indeed, I am delighted to note that in many of our works Jesuits work with and under lay chairs and heads of ministry. 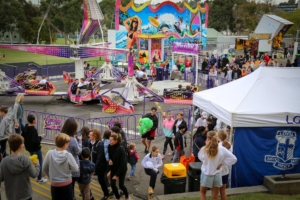 Last Saturday, collaborative working was showcased at the Maytime Fair, which was held at Xavier College in Melbourne. Here, as every year, there is witness to that habitual mixture of good humour, generosity, enthusiasm and meeting of friends.

Begun to support the Jesuit Mission in India, and later extended to other overseas projects, the Maytime Fair and its Sydney counterpart, the Indian Bazaar, have been central events in our Jesuit Calendar for over 60 years.

Long before it became necessary or fashionable, these events modelled the working together of lay people and Jesuits. The planning, hard work and organisation that made them successful were undertaken by groups of lay people encouraged and supported by Jesuits.

The result has been the wonderful support given to the Hazaribag Province and other overseas missions, lifelong friendships formed between Jesuits and co-missionaries, and the freeing of energy and enthusiasm for shared commitments.

The way of working at Jesuit Mission taught early the message that has now been heard throughout the Jesuit world — that cooperative working between lay people and Jesuits is not simply a response to the diminishing number of Jesuits. It is the best way of working for the good of the people we serve and frees the talents, energy and good spirit of all those involved.

It is also the future of the Church, a future that will emerge as older forms of clerically dominated forms of governance give way to more collegial responsibility and expressions of shared mission. The Royal Commission into Institutional Responses to Child Sexual Abuse has shown how important this is.

As Provincial, I am deeply grateful for the great support given to our mission projects by the Maytime Fair. I am also delighted that in this work we Jesuits and laypeople work together as ‘co-missionaries’. This is surely the way to go.