The updated second edition of Jesuit Fr David Strong’s book The Australian Dictionary of Jesuit Biography 1848–2015 was launched at the Ron Dyer Centre in North Sydney on Thursday 19 October 2017. 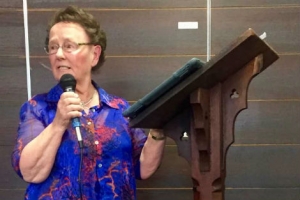 Long-time parishioner at North Sydney Rosemary Flannery launched the book, describing it as ‘an illuminating and thought-provoking book’ and saying that Fr Strong has provided ‘the history of the Jesuits in Australia by giving us a short biography of all those Jesuits who have lived and worked and progressed the vision of St Ignatius Loyola in Australia’.

In his response, Fr Strong said: ‘I do a lot of funerals these days, and particularly old people, the things that are remarked [about them] regularly are their gift of faith and that they’ve persevered to the end. I think that’s a great gift from God.’ He paid tribute to the Jesuits documented in the book, noting that though some of them ‘suffered’ very much’, they, too, ‘persevered to the end’.

Listen to the full audio from the launch here.

Read a review by Fr Andrew Hamilton SJ of The Australian Dictionary of Jesuit Biography here.