Fr Frank Brennan SJ reflects on the history of the Jesuit Community in Canberra, as the Community departs after 51 years in the nation's capital.

After 51 years, the Jesuits are leaving the national capital.  The original decision to come was fairly rushed.  Until 1967, the Jesuits in training would do their university studies in Melbourne. 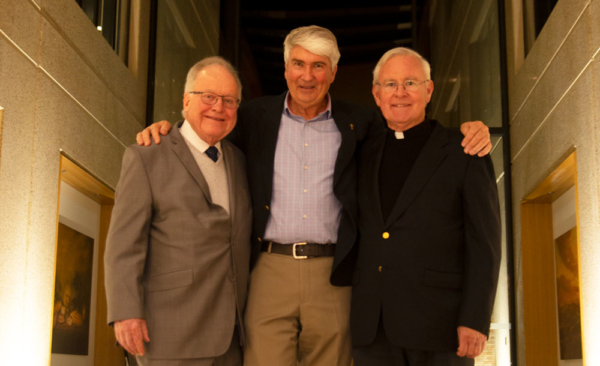 In December 1967, the Jesuit superiors announced that those Jesuits commencing university studies in 1968 would come to Canberra and enrol at the Australian National University.  In February 1968, 14 Jesuit scholastics arrived, accepting the hospitality of the Dominicans at Blackfriars in Dickson.

The Jesuit superior Fr Con Finn was assisted by Fr Greg Dening who used to travel from Melbourne once a fortnight to provide spiritual direction.

Later in the year, Fr John Eddy arrived fresh from Oxford with his doctorate in History.  John took up an academic appointment in the Research School of Social Sciences at the ANU.  For John, Canberra was home until his death 43 years later in 2011.

One of the first scholastics was the budding writer Gerard Windsor who wrote during the first term of the 1968 academic year: ‘It was believed that ANU was small, friendly, not at present difficult to be accepted for, of considerable academic standards, and possessing an excellent staff-student ratio.  The Society (of Jesus) should, it was also felt, have a house in the national capital.’

He concluded: ‘Living here at Blackfriars can, of course, be only a temporary arrangement.  Our future in this house, and the future of the Society in Canberra are, at the time of writing, still in doubt.   If we leave either it will certainly not be due to any lack of generous Dominican hospitality nor to any positive dissatisfaction with the Australian National University.’

After the first couple of years, no further Jesuits scholastics were sent to Canberra for university studies.  The short-lived Jesuits’ Blackfriars/ANU experiment concluded in 1971 when the first batch of students completed their degrees.

The Jesuits then bought a large house on a double block in Yarralumla.  The house had been built as a doctor’s residence with a downstairs surgery.  It was then bought by one of the first computer companies which was unable to use it as a principal place of business.

Over time, Xavier House became known as ‘the Jesuit embassy’, as various embassies were constructed nearby, including the European community, the Spanish and the Irish who joined the already existing German and Dutch embassies.

With the Jesuit scholastics having moved back to Melbourne for university studies, Canberra became the base for a small Jesuit community of priests.  John Eddy worked at the university.  Often there would be a Jesuit working at the apostolic nunciature – over the years, this job was done by Frs.  John Doyle, James Muirhead, John Eddy, and Peter L’Estrange.

The Jesuits assisted in the archdiocese with parish supplies.  Fr Des Purcell loved getting out to the country parishes and providing spiritual direction in the ways of St Ignatius Loyola.  The sedate house accessible to the National Library provided an ideal base for Jesuits wanting to write and research.

I would often come to Canberra to write on Aboriginal, refugee and human rights issues.  Jeremy Clarke came and completed a PhD on the Church in China, and Fr Pat Mullins completed an MA on the Church’s involvement in Aboriginal communities.

A place for visitors

Jesuits from Indonesia and the Philippines came for graduate studies at the ANU as did an Indonesian Franciscan.  This was also a good base from which Jesuits could contribute to the work of the Australian Catholic Bishops Conference.

Fr John Reilly was National Director for Continuing Education of Priests.  Fr Richard Leonard would visit as Director of the Australian Catholic Office for Film and Broadcasting.  I spent the last couple of years as CEO of Catholic Social Services Australia.

Over these last 51 years, Jesuits would often assist in the parish at Yarralumla and in surrounding parishes.  People still talk about Peter L’Estrange’s learned homilies and John Eddy’s encyclopaedic knowledge.

Jesuits from overseas would often stay as visiting scholars at the ANU.  Fr Jeff Von Arx from the USA worked with Fr Eddy setting up the Center for Australia New Zealand Studies at Georgetown University in Washington DC.  Fr Eddy also established the Australian Institute of Jesuit Studies.

When the new Parliament House opened in 1988, ‘the Jesuit embassy’ came within walking distance to our legislators.  Over the years, the house has hosted many off-line meetings and media briefings.

It has often been useful being able to pop across to Parliament House or to the press gallery regardless of the hour of day.  A monthly ‘Jesuit Discussion Group’ has provided a great forum for listening and learning with church members gathering in the conference room to reflect on the events of the month in light of our faith and shared Catholic tradition.

A hub to the world

Canberra has been a great hub from which a handful of Jesuits has been able to reach out to the wider world.  The spirit of the Jesuit contribution in Canberra this past half century is summed up in what I said about Fr Eddy at his funeral in St Christopher’s Cathedral on Remembrance Day 2011: ‘Though spending most of his Jesuit life here in Canberra, John experienced his missionary call to the frontiers.  His life of the mind, his infectious sociability, and his delight in all human achievement from a faultless tennis backhand to a spine-tingling opera aria by Joan Sutherland made him open to possibilities well beyond his own comfort zone and competencies.’

At our best, we Jesuits in Canberra this past half century have embodied and enacted  the 2008 declaration by the General Congregation of Jesuits: ‘The complexity of the problems we face and the richness of the opportunities offered demand that we build bridges between rich and poor, establishing advocacy links of mutual support between those who hold political power and those who find it difficult to voice their interests. Our intellectual apostolate provides an inestimable help in constructing these bridges, offering us new ways of understanding in depth the mechanisms and links among our present problems.’

Fr Stephen Astill will remain in the diocese as administrator of the parish at Moruya.  But I will be the last Jesuit in Canberra, departing at the end of the year to take up a new appointment as the Rector of Newman College at the University of Melbourne.

They have been blessed years here in the national capital.  Fr Eddy was fond of saying, ‘You don’t have to make a case for a Jesuit presence in a national capital.’  But alas, we no longer have the personnel on hand.

We leave with regret, but grateful for the many seeds that have been planted at the Jesuit embassy in Yarralumla and appreciative of all those who have supported us and encouraged us.

This article originally appeared in Catholic Voice, newspaper of the Catholic Archdiocese of Canberra and Goulburn.