Like many of our Brothers, Br John May SJ, who recently marked more than 50 years at Sevenhill in SA, has worked hard and selflessly, available and generous in service of our Province mission.

One of the privileges of being a Provincial — and there are a number — is the opportunity to celebrate the lives and gifts of living Jesuits. I have, in recent weeks, been present at the launching of two books by Jesuits and have caught up with some of our 50, 60 and 70-year jubilarians. 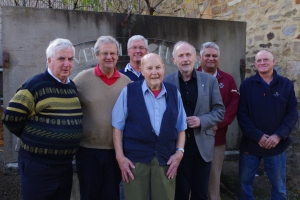 Jesuits and staff at Sevenhill with Br John May SJ (front, centre) and Fr Brian McCoy SJ (third from right).

This week I am in Sevenhill, celebrating Brother John May and his more than 50 years of service in that very much loved ‘vineyard’ in the Clare Valley of South Australia; home to our parish, house of spirituality and winery. John will shortly retire to the Arrupe community in Sydney.

John has been at Sevenhill for over half a century, following in a long and strong tradition of Jesuit Brothers who were winemakers. His curriculum vitae for many years noted: vigneron, vintner, viticulturist, custodian of cemetery, sacred buildings and house chapel. A rich tapestry of talent and service.

Born in Naremburn, NSW, trained as a carpenter and joiner, John entered the Society of Jesus in 1949. Jesuits remember him in the 1950s at Loyola College, Watsonia, getting up before others at 4am to light the boilers for the community.

Like many of our Brothers, John has worked hard and selflessly, available and generous in service of our Province mission.

As we, and many others, give thanks for John, I am aware, on this occasion, we are also celebrating the gifts of those other Jesuits who are Brothers. Later this year we will celebrate the 400th anniversary of the death of St Alphonsus Rodriguez, the Jesuit Brother who is remembered for his faithful service as porter at the Jesuit house in Majorca for almost 50 years.

When St Ignatius founded the Society of Jesus he found men willing to give their lives in service as Brothers, providing material support and valued company for those who were ordained. Our Province has been richly blessed by such men.

Not just Jesuits, but many other Australians remain grateful for all John has done, not just for his long association and support for our works at Sevenhill but also for contributing to hospitality and tourism in the Clare Valley. There he is acknowledged as a legend. To us, he is a loyal and energetic companion and friend.

At Sevenhill John May has been the last of many Brothers whose quiet work began, consolidated and developed the winery. The hidden work of our Brothers has been equally important in the Lord’s Australian Vineyard. They are keystones of our mission.