The humanistic tradition in Jesuit Education

When we speak about Jesuit education being a humanistic education, people’s eyebrows sometimes begin to knit. They look suspicious. That is because contemporary culture — indeed, the culture of a century or more — mostly thinks in terms of secular humanism. A humanism which is, more often than not, at odds with belief, with faith, with religion. Often aggressively so. 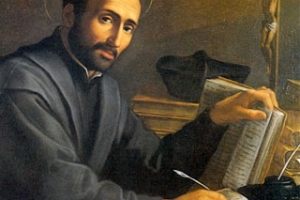 Portrait of St Ignatius completed around the time of his beatification in 1609.

The first Jesuits were caught up on the wave of Renaissance Humanism, a Christian humanism, and they soon embraced that fresh culture. Humanism emerged in response to the dry, academic nit-picking of medieval scholasticism, the sort of speculations parodied in suggesting those theologians might endlessly debate about the number of angels that could dance on the head of a pin.

But Humanism engaged with the real world, with people, because, as the Jesuit poet Gerard Manley Hopkins put it, ‘The world is charged with the grandeur of God’, if only we were to look. Humanism values human dignity. It makes sense of the world using experience, reason, shared human values. It is being persuasive.

It encourages making the best of our lives, using meaning and purpose, having concern for others, feeling for and empathising with them. It is about imagination, reason, testing and evaluating. It desires full human flourishing.

Ignatius was influenced in Paris by studying the great Dominican theologian, Thomas Aquinas. One of Aquinas’ best-known propositions was that ‘grace builds on nature’. Ignatius was drawn to the concept. It suggests the supernatural life does not negate or destroy the natural world. Rather, grace sanctifies, elevates and renews nature.

Ignatius then went on to say that we collaborate with God in extending the boundaries of God’s Kingdom of love, peace and right relationships here on Earth. The pairing of such dualities is always a characteristic of the Jesuit enterprise, especially in education: grace and nature, spirit and matter, faith and reason, sacred and secular, contemplation and action, religion and science, Church and culture, transcendent and immanent.

Jesuits don’t often see the world in black and white. They can be comfortable with the grey. The boundaries are porous. That is why you will find Jesuits pursuing all manner of careers as priests — scientists, actors, wine-makers, astronomers, poets. A Jesuit Old Boy from Riverview, Fr Bede Lowery, was one of Australia’s foremost authorities on ants — and had a number named after him.

Not surprising, then, that the best summary of Ignatian spirituality is ‘finding God in all things’.

As a teaching order, this humanistic style, this liberal education, sought to educate the whole person, having them participate in all that can enrich and free them. As a missionary order, the Jesuits’ humanism went on to embrace the human horizons of newly discovered lands — from the Americas to the Far East.

As an interesting aside concerning those missions, all those letters coming back to Rome from missionaries in their far-flung outposts contained descriptions of never-before-heard-of peoples, their cultures, beliefs, customs, landforms, climates, foods, exotic creatures, novel forms of government and so on. These letters were copied and circulated to the European Jesuits.

In the colleges, these descriptions were shared with students, perhaps to encourage vocations. The early Jesuits, devouring those letters, would have known and approved of the line from one of the plays of the Roman playwright, Terence, ‘I am a human being: I think nothing human strange to me.’

Humanism is expansive. After a time, one Jesuit in our college in Avignon, Fr Nicholas Bonvalot, intrigued by these accounts from the edges of the known world, systematically collected them and produced a 94 page book in 1611, creating what we now know as the subject of geography.

But back to humanism … those early Jesuit educators readily included in their curriculum the Greek and Roman classics as well (of course) as Scripture. We were criticised by some for using such ‘pagan’ texts. But it was because those so-called ‘pagan’ histories, speeches and poetry invariably treated the perennial human issues of morality, of choices, the nature of good and evil, and so on.

Students were learning what it was to be human, what is expected of one, how to lead the best life. What is our duty to others, to our family, to our nation? For what reasons, if any, should I be willing to die? Why is there suffering? Is there a God, and, if so, how can I know him? These are ‘the big questions’ in life.

Long before such things as school mottos came into being, those early Jesuits universally put before their charges in the colleges, a line from the great orator, Cicero, non nobis solum nati sumus (‘we do not exist for ourselves alone’). Yes, he was yet another pagan. But already we can observe here something universal: a sense of social responsibility, of duty and outreach, being inculcated. It is a fostering a sense of urgency, of agency — what we call today the moral imperative.

‘Humanism … essentially tends to render man more truly human and to make his original greatness manifest by causing him to participate in all that can enrich him in nature and in history … It at once demands that man make use of all the potentialities he holds within him, his creative powers and the life of the reason, and labour to make the powers of the physical world the instruments of his freedom.’

When yet another great 20th century German philosopher, Ludwig Wittgenstein, was asked ‘What is your aim in philosophy?’ his response was, ‘To show the fly the way out of the bottle.’ John O’Malley SJ, one of the best historians of the early Society, takes up this interesting metaphor and writes:

‘What the Jesuit humanistic tradition aims to do is to help the fly to fly out of the bottle — that is, to allow students to escape the confines of their experiences, to expand their awareness beyond the comfort zones of thinking in which they have grown up, to expose them to other cultures and to other modes of thought, to lift them beyond the everyday, help them free themselves from the bondage of unexamined assumptions, and expand the areas in which they dare to ask questions, in their future professions and about life itself.’

This is a life-long task, to be sure. But, of course, one of the Characteristics of Jesuit Education is ‘life-long openness to growth’. That’s a very long-term ambition. But in the Jesuit humanistic tradition, the school is a place and, moreover, a space for such beginnings.