Hope that the Royal Commission marks a turning point

Last week I attended the Royal Commission into Institutional Responses to Child Sexual Abuse. I was on a panel with representatives of other religious congregations, five male and one female. 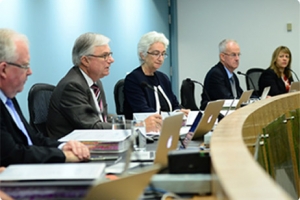 The Royal Commission into Institutional Responses to Child Abuse

Like so many Australians I have been horrified and ashamed by the extent of sexual abuse of children in Catholic institutions, including our own, laid out by the Commission. I have been overwhelmed by the terrible and lasting damage done to so many who had suffered abuse and to their families and friends. I recognised afresh the weight of my responsibility to ensure that it in our Jesuit circles it never happens again.

I was nervous before my appearance at the Commission. It recalled an experience in my final year in Theology when we faced a long and demanding oral exam. While we tried to prepare for all possible questions we knew we could be questioned on anything and found wanting in many! And, watching some of the Catholic Church case study in the Commission these past weeks, I knew there was a large range of possible topics that had been raised. They included not only child safeguarding policies and practices but also celibacy, women in the church, confession, homosexuality, admission of candidates, formation, professional supervision and much more.

Being questioned at the end of a long day had some benefits. I was not asked some questions that others were asked. That also had its disadvantages. Unlike some other orders who have none or few in formation we are fortunate to presently have five novices and another eighteen Jesuits between first and final vows. I have a strong commitment to their future and how we are all called to live the best of gospel and Ignatian values.

The occasion also brought back memories of working as a Research Officer for the Royal Commission into Aboriginal Deaths in Custody, some 25 years ago. I now realise it is much easier to work up the questions that you think go to the heart of the issues at hand than answering some of the hard ones others put before you.

Recently I came across a US study, ACE: Adverse Childhood Experiences. The study showed that large numbers of children suffer trauma, more than is often realized. In a survey of mostly white, middle class, middle aged, well educated, and financially secure people, only one-third reported no adverse childhood experiences. These personal experiences include verbal or physical abuse and the witness of such abuse in the family. What is now becoming more evident is not only the vulnerability of many children but also how these experiences can lead to serious health issues in later adult life.

I mention this ACE study to emphasise the importance of our three-year Province commitment to the Australian Childhood Foundation’s Safeguarding Children Program. We are committed to improving our child safety policies and protocols and being audited on them. This is not a fear-driven exercise, one to avoid media scrutiny or future legal claims. It is to make sure, as much as humanly possible, that all our Province ministries are safe and welcoming, especially for children and the vulnerable.

When we look back at this current Commission, as we have recently at the 25th anniversary of Aboriginal Deaths in Custody, I hope we can say it was a turning point for renewal in our Church and Province life: that it did make a difference, children do feel safe in our institutions and we, Jesuits and lay, remain the committed carriers of that gospel message: ‘to such as these the Kingdom of God belongs’.