In the homilies collected in his book With (Great) Respect, Fr Bill Uren SJ displays great respect for the truth of the Gospels and the truth of the world, and also for his hearers, writes Fr Andrew Hamilton SJ. 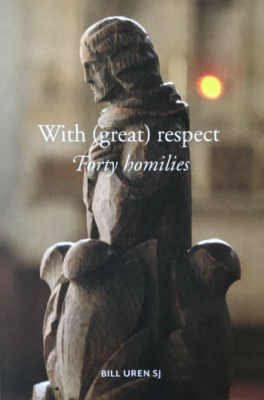 In the 18th and 19th centuries, many preachers, Protestant and Catholic, published books of sermons. The volumes were large, as were the sermons. In one of his novels, Walter Scott describes the demeanour of various members of an Edinburgh congregation after each half hour of a three-hour sermon.

The practice of publishing sermons is now being revived, but mostly in slim volumes for short sermons. This year the homilies of Fr Bill Uren SJ have appeared at the same time as a fine collection of sermons and talks by Sydney Archbishop Anthony Fisher OP.

I was initially puzzled by the title, With (Great) Respect. It seems to imply that respect can be measured, and perhaps even withdrawn from particularly recalcitrant people. Might that not be a dangerous attitude for Christian preachers who live in hope of helping people turn from their obtuse ways?

All of these homilies were given to a congregation of university students at Newman College, Parkville, Vic. Most explore the implications of the Gospel passages used in the Sunday liturgy.

They put Gospel stories into context, developing in an attractive way their complexity and richness, and relating them freshly to the world of the listeners. Stories grown dull by long familiarity glint with new challenge.

In his sermons Fr Uren often turns to prominent issues of the day. These include such controverted topics as same sex marriage and the clerical sexual abuse of children. He brings out the complexities of these issues and argues to clearly stated conclusions without hammering or fudging them.

He never resorts to qualifications that are motivated by the desire to protect one’s tail rather than use one’s head. He does not force his argument on his hearers but leaves them well informed on the issues, free to reflect on them and to draw their own conclusions.

The homilies display the qualities of a fine teacher: clarity and engagement, complemented by a gift for finding moving or humorous stories and pertinent incidents from his own experience to illustrate and enliven them. Though sometimes diverting, the illustrations are never a diversion.

If they are rich and exigent in their argument, the homilies also appeal to the heart. Not in enthusiastic, intimidatory, sentimental or facile ways, but by facilitating a response to their invitation to depth.

The language is easy, the communication direct, and the demand of the Gospel made attractive to mind and heart. The world of the Gospels and the teaching of Jesus are represented in their human richness and evoke a similarly broad reception in the hearer’s imagination.

After reading Fr Uren’s book, I began to understand the initially mysterious title of the book. It points to a double respect that runs through the homilies. A respect first for the truth of the Gospels and the truth of the world.

The richness and demand of the Gospel stories and of the Catholic tradition are fully honoured. So is the complexity of the world and of the ethical questions we face, the reality that people of good faith can come to different conclusions about them, and the need to work hard to seek for truth when considering them. Fr Uren avoids cheap knock-down arguments and easy solutions.

Second, he displays a great respect for his hearers. He does not speak down to them but invites them into a serious reflection on the Scriptures, on Christian faith and the Catholic tradition and on their implications for their own lives.

In this invitation he asks much of them, presuming that they will want to give much. When he draws conclusions, he leaves them free to accept or reject them, trusting them to do so responsibly. He clearly knows his congregation well, and running perhaps even deeper than respect, a deep affection for the students flows through the homilies.

When great respect is offered, it can sometimes imply that to the person who receives it, no respect at all is really owed. In this book the respect offered in the title is an assurance that in the homilies the full respect owed to the truth enshrined in the Gospel and to each human being is being paid.